Ruan Pienaar must prove his fitness for Springboks 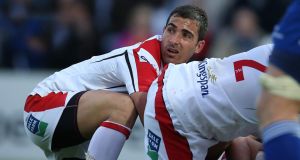 Ruan Pienaar will undergo a fitness test in Dublin next week ahead of South Africa’s opening game of their European tour against Ireland. photograph: Billy Stickland/Inpho

Some good news for Leinster in yesterday’s 36-man Springbok squad for the European tour that begins in Dublin on November 8th as Heyneke Meyer has not selected Zane Kirchner.

In contrast, Ulster may not get their prized possession, Ruan Pienaar, back in Belfast until December.

Pienaar was the starting South African nine during the summer’s Rugby Championship until a knee injury ruled him out of Ulster’s opening defeats in the European Champions Cup, making it almost certain that they will not reach the knockout stages. Pienaar will undergo a fitness test in Dublin next week. One of rugby’s greatest ever scrumhalves, Fourie du Preez is unavailable following ankle surgery.

Providing cover at fullback for the brilliant Willie le Roux, is Johan Goosen, who is Jonathan Sexton’s understudy at Racing Metro 92, meaning there is no place in the squad for Kirchner.

“The last time I was in the Bok camp was in June and Heyneke Meyer said to me it would be difficult to pick me because I’d be playing in France, ” said Goosen. “He said he would pick Morné Steyn [of Stade Francais] but he’s picked us both.’

There are six European based players in the Springbok squad, including Toulon pair Bakkies Botha and Bryan Habana, along with Toulouse loosehead prop Gurthrö Steenkamp.

Marcel van der Merwe’s injury leaves a lack of experience at tighthead, with Julian Redelinghuys one of five uncapped players on the panel.

There are two players contracted to Japanese clubs, 2007 World Cup-winners JP Pietersen and Schalk Burger, who is re-establishing himself in the South Africa backrow after two years of injury and illness.

Victor Matfield has come out of retirement to act as vice-captain behind former Munster centre Jean de Villiers.

Leinster coach Matt O’Connor indicated over the weekend that Rob Kearney and Mike Ross should be able to prove match fitness when Edinburgh visit the RDS on Friday.

Both men will join the Ireland squad in Carton House today with medical updates on Gordon D’Arcy (groin), Stuart Olding and James Cronin expected this afternoon.

Connacht reported Robbie Henshaw’s withdrawal at half-time during Saturday’s 33-13 defeat to Exeter as part of the “game management” programme.

Over the weekend Stuart Barnes added his voice to the growing din of media opinion – which includes former Ireland centres Brian O’Driscoll and Maurice Field – that Henshaw is the best long-term option at 13, following Jared Payne’s impact when switched to fullback against Toulon on Saturday.

Barnes, writing in The Sunday Times, compared Payne’s move to centre this season with All Black coach John Hart’s ill-fated decision to try Christian Cullen at 13 during the 1999 World Cup.