Rory Best declares his fitness and desire to lead Ireland 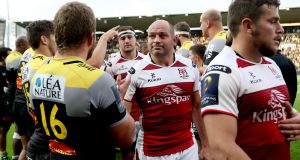 Rory Best has declared himself fit, ready and keen to lead Ireland in their Guinness Series opener against South Africa at the Aviva Stadium next Saturday fortnight.

The Ulster and Ireland captain did not make his seasonal reappearance until last Saturday, when coming on as a 62nd minute replacement, due to a torn hamstring he suffered in training. It was his first match since captaining the British & Irish Lions to a draw against the Hurricanes in Wellington on June 27th.

But with the prospect of a first start of the season against Leinster this Saturday, in what would his 200th appearance for the province, Best expressed the belief that this would be sufficient to bring him up to match fitness.

“I’d hope so yeah,” he said yesterday after Ulster returned to training with a fairly light morning due to the toll of the La Rochelle game and a six-day turnaround.

The Irish squad of around 35 to 37 is expected to be announced tomorrow and Ireland, who have risen to third in the world rankings, face a Springboks side who came within a point of the All Blacks in their last outing, followed by games against Fiji and Argentina.

“It’s massive, and it’s an opportunity if we want to make a statement about where we are and that we want to push on and get that [Six Nations] championship back next year. It’s three games we have to perform very well in. If we do that we can win all three. We’ve had two years where we’ve played well, played not so well and made a bit of history but haven’t quite had that consistency that we need to get to back to that. It’s three really tough Tests to see where we are.”

The reverberations from Simon Zebo’s departure at the end of the season have been felt throughout the four provinces, and, while understanding that the Munster man “will do what is right for him” the Irish captain admitted to disappointment on hearing the news.

“It is, and we don’t have a massive pool of players to pick from. It isn’t England where you can have a hard and fast rule and say ‘well we have another three players of Simon’s ability to pick from’. It is really disappointing for someone like him to probably rule himself out.

“It is an opportunity for somebody coming behind and very quickly you are going to have to find someone of Simon’s ability to stepping up and play 11, 14, and 15, which there’s not too many people about with the skill level he can do.

“From an Irish point view, it is a big loss, as much as anything for his ability. Characters around the place are hard to come by. True characters are probably becoming fewer and fewer as the level of intensity, and level of training expected, becomes younger, younger and younger. To get these sort of guys is hard to find, but I’m sure we’ll unearth somebody.

“It’s like everything, we will have to fill what will be a bit of a void in the backline, more so for Munster. But from an Irish point of view it will be a loss, it will be sad to be potentially in an Ireland squad without him.”

“You can probably argue, if anything, there should be more Ulster players going as we don’t have the same tax incentives,” noted Best.

“Maybe it’s because we don’t really like to leave home,” he quipped, before admitting: “When you look at the list of players in Ireland squads, the Ulster contingent has been relatively small on a consistent basis, and top English and French clubs only want the best as they are under a [salary] cap as well.

“Maybe we have not had as many talented players, and we do have talented players, but it’s not a conveyor belt like Leinster. We have to fight hard to make sure they stay. It’s hard to know why; as long it doesn’t happen in the next couple of years.

Ulster expect to welcome back lock Jean Deysel and outside back Louis Ludik after both missed the La Rochelle game, but Wiehahn Herbst (calf), Christian Lealiifano (hamstring) and John Cooney (sternum) will have tests later in the week after suffering those injuries in last Sunday’s bruising game in France.

Kyle McCall, who pulled out of last Sunday’s Champions Cup game at La Rochelle, is hopeful of returning.