Joe Schmidt has announced the team to take on England this weekend. Robbie Henshaw will start at fullback and Josh van der Flier at openside. Video: David Dunne 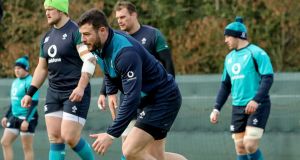 On top of the surprise selection of Robbie Henshaw at fullback instead of Rob Kearney and Josh van der Flier at openside ahead of Seán O’Brien the Ireland bench shows some interesting changes ahead of the Six Nations opener against England on Saturday evening at the Aviva stadium (kick-off 4:45pm).

Turns out attendance at last week’s warm weather camp in Portugal mattered more than being left at home to play for Leinster, as Kearney and Jack McGrath have discovered to their cost.

Dave Kilcoyne keeps the Lions prop - who has missed six weeks this season with knee surgery - off the squad while Jordan Larmour’s versatility and form sees him picked ahead of Kearney, Andrew Conway and Will Addison at number 23.

As expected, Johnny Sexton and Conor Murray resume their halfback partnership with Ulster’s John Cooney in line for a Six Nations debut.

Quinn Roux, despite not being named in the initial Six Nations squad, makes the replacements ahead of Ultan Dillane with Iain Henderson and Tadhg Beirne both injured at least until the Italy match in round three.

Switching Henshaw from centre to 15 remains the most interesting decision by Joe Schmidt.

The 25-year-old has won all but one of 36 caps at centre, the exception being his debut in Houston against the USA in June 2013.

Initially a fullback by trade, since establishing himself in the Connacht team as a teenager, Schmidt converted the Athlone native to outside centre with a view to succeeding Brian O’Driscoll at the 2015 World Cup.

However, the arrival of Jared Payne, the Kiwi qualifying for Ireland via residency, saw Henshaw shifted to inside centre. The partnership with Payne clicked until injury and the emergence of Garry Ringrose saw the Irish midfield landscape change once again.

“I think (Schmidt) knows that I have played plenty of rugby there,” said Henshaw in November. “Where he can get the best out of me is where he will play me.”

An abundance of riches at centre, where Bundee Aki remains the starting 12 prompted Schmidt and incoming head coach Andy Farrell to get all their in-form players on the pitch at the same time.

Seemingly, Henshaw’s return to the back field was to happen in the November Test window but a hamstring injury kept him out of action until Leinster’s victory over Wasps on January 20th, when he returned at centre. Leinster did play him at fullback during the Pro14 fixture in Treviso on October 27th.