Ringrose, Furlong and Murray among nominees for European Player of the Year 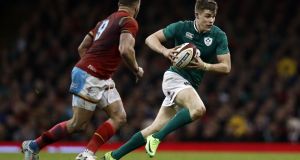 Ireland’s Garry Ringrose is among thosse nominated for the European Player of the Year award. Phiti: Inpho

Six Irish-based players have been nominated for for this year’s European Player of the Year award.

EPCR have officially revealed the full list of nominees, with Irish-based clubs leading the way with six nominations in total.

Leinster’s Garry Ringrose, Tadhg Furlong, and Isa Nacewa are among the names on the 15-man shortlist, in what continues to be a good season for the Blues.

The entire list features players from six of this year’s eight Champions Cup quarter-finalists, with 2015 champions Toulon and four-time winners Toulouse the sides who miss out.

English clubs trail their Irish counterparts with five nominations, including three for Wasps and two for Saracens, including last year’s winner Maro Itoje.

The public vote to crown this year’s winner will open on April 3rd. This will then whittle down the nominees to a short list of 5. The winner will subsequently be announced on finals weekend in May.