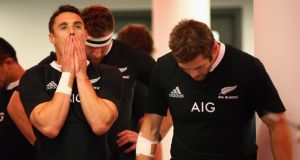 Dan Carter and Richie McCaw will play together for the last time for the Canterbury Crusaders. Photo: Phil Walter/Getty Images

All Blacks captain Richie McCaw has recovered from a head knock and returned to the Canterbury Crusaders squad for a Super Rugby clash against the Queensland Reds on Friday which will mark the end of an era.

McCaw, who took a knee to the head against Auckland Blues two weeks ago, comes back on the bench for the Crusaders’ final match in Christchurch this season, which the 34-year-old flanker has indicated will be his last.

With outhalf Dan Carter scheduled to leave for France after the World Cup, Friday could be the last chance for Christchurch fans to see two of their greatest players in the red shirt of the seven-times Super Rugby champions.

Defeat at the hands of the Wellington Hurricanes last week means the Crusaders now look set to miss out on the Super Rugby playoffs for the first time since 2001.

That was the year McCaw, now 34, made his debut for the Crusaders and the All Blacks, earning his first test call-up despite having played just eight minutes of Super Rugby.

Carter came on board in 2003 and the pair helped the Crusaders dominate southern hemisphere provincial rugby, reaching the Super Rugby final six times in seven years and winning the title in 2005, 2006 and 2008.

“Being a Cantabrian and growing up in Christchurch, to play for Canterbury and the Crusaders has meant so much to me,” Carter told local media on Monday.

“To think it is probably going to be my last game on home soil means it will be a pretty emotional time throughout the week.

“What I love about playing at home is being in front of the fans. They are the best in the world, so hopefully we can get a good turnout.”

Carter will start against the struggling Reds but not in the number 10 shirt he has worn with such distinction for more than a decade.

The 33-year-old will instead again line-up outside with Colin Slade at centre as the Crusaders look to keep their slender playoff hopes alive.

“I just want to be playing,” Carter added. “Obviously my preference is 10 but I am doing what is best for the team at 12. It is just one of those things, I have to get on with it and Sladie is in fantastic form. It just makes sense.”