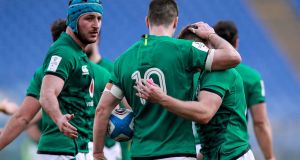 Johnny Sexton was back to his best in Ireland’s win over Italy on Saturday. Photograph: Inpho

Ireland and Leinster outhalf Johnny Sexton has signed a one year extension to his IRFU contract up to the end of the 2021/22 season.

The 2018 World Player of the Year took on the Ireland captaincy in January 2020 and is one of Irish rugby’s most decorated players. He has been central to both Ireland and Leinster’s success for over a decade following his international debut against Fiji in November 2009.

A two time Lions tourist in 2013 and 2017, Johnny has won three Six Nations titles with Ireland and four European Cups with Leinster. He has represented his provinces on 171 occasions scoring 1505 points.

The next Rugby World Cup is to be hosted by France in 2023.

David Nucifora, IRFU Performance Director, commented, “Johnny continues to show he has the quality and appetite to compete at the highest levels. He is playing an important leadership role with the Ireland squad and his insight and experience continues to be of great value to the group.

Sexton himself added: “I am really enjoying my rugby and I want to keep learning and adding value to both the Ireland and Leinster environments. I am enjoying the challenge of captaincy and the added responsibility that it brings. My appetite for success is the same as it ever was and the ambitions of both the Ireland and Leinster squads match my own.”

Matsuyama’s crowning glory at Augusta always seemed his destiny 18:12
Munster and Ireland flanker Tommy O’Donnell to retire at end of season 15:43
France will travel to Dublin to play Ireland after being granted exemption 14:35
Once pain of defeat eases Frampton will be glad it is all over 14:03
Leinster submit detailed plans to Government for safe return of spectators 13:15
Crossword Get access to over 6,000 interactive crosswords