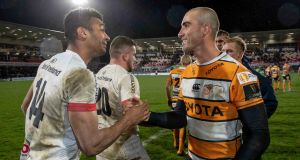 Hardly the most memorable way to equal their 21-game unbeaten home record, but Ulster got the job done on a wet and uncomfortably cold Kingspan evening in a game they had to win to keep the Cheetahs and Glasgow at bay in Conference A.

The four hard-fought points ensured that the second-placed Irish province are now 10 points ahead of the chasing South Africans - and seven in front of Glasgow now in second - who had former Kingspan hero Ruan Pienaar back for his first competitive game in Belfast since leaving in 2018.

In the end, they took the points through scores from Ireland squad member Tom O’Toole and winger Robert Baloucoune, the latter’s sixth touchdown in seven games.

Man of the match, and former Munster player, Bill Johnston kicked 10 points as Ulster pushed on from leading 10-3 at half-time. Pienaar kicked a penalty and converted Clayton Blommetjies’ late try but it wasn’t enough for the visitors.

Ulster were out of the blocks after seven minutes - Michael Lowry ducked under two tacklers early on in the move before centre James Hume was held short which allowed O’Toole to pick up and drive over. Johnston converted.

If Ulster assumed that this would be the start of a potential stream of points in the chilly conditions, then they soon realised that the Cheetahs were not going anywhere. Indeed, it was the South Africans who came closest to scoring in what was largely a stalemate until five minutes before the break.

After being pinged for a high tackle, Johnston bisected the posts to bring Ulster three very valuable points. Four minutes later, though, and hands in the ruck by Luke Marshall allowed Pienaar to line up a shot at goal and, as of old, he didn’t miss.

The half ended with Ulster trying to put width on the ball only to lose possession and then rely on Dave Shanahan to scramble back to rescue a dangerous looking situation.

Ulster’s 10-3 half-time was quickly added to. After Marcell Coetzee had won a turnover penalty, Cheetahs’ hooker Wilmar Arnoldi was binned after several more penalties in the South Africans’ corner. Johston’s cross-kick picked out Baloucoune who dived over in the right corner. Johnston then added a superb conversion to complete the set.

Ulster stretched their lead to 20-3 on 59 minutes from Johnston’s second penalty. Before, six minutes after the hour, Sintu Manjezi intercepted a Jonny Stewart pass (and though Ulster scrambled well) Cheetahs’ fullback Bloometjies scored out on the right with Pienaar slotting the extras which proved to be the game’s last scoring action. A fitting one too.

Replacements: A Davis for Massyn (half-time), J Dweba for Barry (53 mins), Arnoldi for Dweba, C Marais for Venter and A Coetzee for de Bruin (all 59 mins), C Smit for Small-Smith (65 mins), JP du Preez for Steenkamp, T Meyer for Pienaar and L Fouche for Barry (78 mins).