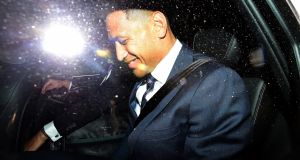 Wallabies fullback Israel Folau rejected a A$1 million (€892,000) offer from Rugby Australia to walk away from his contract ahead of this weekend’s code of conduct hearing, local media reported on Sunday.

Folau, a fundamentalist Christian, on Saturday faced a three-member panel who will decide whether he breached RA’s code of conduct with a social media post that said ‘hell’ awaited ‘drunks, homosexuals, adulterers’ and others.

More evidence was heard from Rugby Australia chief executive Raelene Castle and her New South Wales Waratahs counterpart Andrew Hore on Sunday and the hearing will continue on Tuesday, the governing body said in statement.

The Sunday Telegraph earlier reported that Folau could have avoided it altogether if he had agreed to accept a sum equivalent to one year of his lucrative contract.

RA and the Waratahs have already publicly committed to terminating Folau’s contract and last month served the 73-test back with a ‘high-level’ breach notice.

That said his social media post had ‘disrespected’ people on the basis of their sexuality in breach of his contract and Rugby Australia’s inclusion policy.

Folau was issued a formal warning after a similar post last year but attempts by Rugby Australia to include specific clauses about social media posts in the contract the player signed in February were rejected, the newspaper added.

The record Super Rugby try-scorer’s high-powered legal team will argue that Folau was merely quoting scripture and not directly disrespecting any individual, the report said.

Folau, Castle and Wallabies coach Michael Cheika all gave ‘oral evidence’ on day one of the hearing.