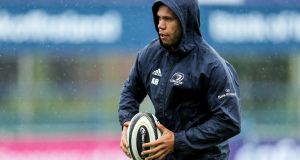 Adam Byrne is cautious when outlining his goals for the season ahead. His injury profile has periodically denied him opportunities to lay claim to a Leinster jersey on a more permanent basis, the latest setback of which was a quad issue that ended his season prematurely last April.

In 52 appearances for the province – he won his only Ireland cap to date in a November test against Argentina in 2017 – he has scored 19 tries, including three in four starts for Leinster in last season’s Heineken Champions Cup pool matches.

The 25-year-old joined pre-season training a little later than his teammates but has featured in warm-up matches ahead of Saturday’s opening Guinness Pro14 game against Benetton in the Stadio Communale di Monigo. A highlight was playing for Leinster against Canada as part of the latter’s build-up to the Rugby World Cup in Japan.

There is a block of five Pro14 matches before the first Champions Cup game and Byrne knows that with a sizeable Leinster contingent in the Ireland squad in Japan, he will get his chance to impress.

He admitted: “Everyone wants to own the jersey and we don’t want to give it up when the lads come back from the World Cup. Hopefully they go very well and win the World Cup. We want to do the best we can in the Leinster jersey so when they come back, there is a bit of competition there and we are giving the coaches tough choices to make.

“I really want to own that jersey, play in the big games, play in the finals at the end of the season, get on the pitch when we are lifting some silverware. That’s a long term goal, short term it’s about training (well) and taking it game by game.”

During his latest injury sabbatical he spent much of the time working with the skills coaches to polish the core attributes required to excel as a winger. “You are on the pitch in pre-season four times a week and we have skills windows before and after each session, that’s eight chances.

“I am trying to grow everything, tackling, passing, catching, kicking, the main winger’s skills and then staying on top of the video analysis.”

He has also worked on his personal development, subscribing to the benefits of ‘mindfulness,’ something he has addressed for the past 18 months or so. “I feel pretty good. When I was injured I had a lot of time to work on myself as a person and as a leader. I do feel really good physically and mentally. I can’t wait for the season to start.”

A superb athlete, excellent in the air and with the power and footwork to offer a real cutting edge out wide, Byrne knows that he needs to keep fine tuning his work in defence; not tackling per se, but a general appreciation of where to be, when to step in or stay out.

“I want to keep building, keep growing, get better as a player and hopefully that will bring more opportunities for me within Leinster and hopefully bigger things on top of that. I am just staying very short term goal focused.”

That first opportunity arises this weekend in Italy. Even though Benetton have contributed handsomely to the Italian squad at the World Cup, there is depth to their squad from their foreign contingent – there is likely to be two very familiar Irish faces in Ian McKinley and Ian Keatley on duty for the home side at the weekend – and also a core of international players who didn’t make Conor O’Shea’s squad for Japan.

Byrne pointed to the Italian club’s excellent form last season and Leinster know exactly how difficult Benetton can be having lost to them and drawn at the RDS over the past couple of campaigns. “It’s going to be a good test for us. Hopefully we get some good weather and get to run the ball.” More than most he would appreciate that opportunity.