Ulster wake from slumber to carve out bonus-point win 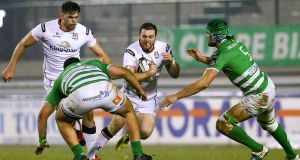 Ulster coach Les Kiss saw his side put in another big second-half performance as they secured a bonus-point win over Treviso at Stadio Monigo on Saturday .

A lazy, unrecognisable Ulster left itself in the changing room at the end of the first 40 minutes, to become a true compelling force, one that the Italian side had no answer for.

“The first half was really disappointing as we weren’t doing what we had planned,” admitted Kiss.

“But we had a frank talk in the changing room with guys that are honest to themselves and knew they weren’t playing to their standards. We were kicking too much, not gaining the advantage line and giving back the ball to Treviso, that has a dangerous back three and we weren’t performing in the scrum.

“We also have to give credit to our bench for how the game evolved and I think that’s what really made the difference.

The first half was mostly tactical with a lot of ping-pong rugby and many positional kicks from Jayden Hayward and Ian Humphreys.

In the rainy north-east of Italy, it seemed almost sure that discipline would be the key point of the night and indeed two offsides cost the home side dear, with Humphreys putting his side in front on both occasions, first with a penalty after 10 minutes and then with another one with just a few seconds to go in the half.

In between, Hayward had tied things up after a tackle without the ball on Enrico Bacchin courtesy by Callum Black.

The second half saw a complete change of gameplan from Ulster, with lots of pick and go and retention of the ball.

Their scrum started to find its way and the rolling maul started gaining yards with Humphreys opting to go for touch instead of an easy kick in front of the posts, as Sean Reidy continued his try-scoring form, dotting down over the line.

Darren Cave was on Humphreys’s wavelength on 57 minutes and a change of angle saw him go all the way.

Just five minutes later, from a Treviso scrum, Sam Christie opted for the wrong choice and passed the ball right into Rory Scholes’s hands to run the length of the pitch for the third try.

Game won but mission still not accomplished in full with the search for the bonus point still alive.

Try number four duly arrived in the final minutes when Stuart Olding capped his return to action after 10 months out with a try.

“Stuart is such a great player and you can see that in the way he understands the perfect timing and space,” said Kiss of his young centre. “In the last 20 minutes I asked him to play at number 10 giving him a bit more exposure and he came out of it brilliantly. He’s just a class and extraordinary guy.” added Kiss.

A consolation try came for the home side was scored by backrow Abraham Steyn in the dying minutes of the game.

Spurs complete signing of Pierre-Emile Hojbjerg 19:27
Linfield could get bye after opponents placed in quarantine 19:19
Champions League feast awaits but no party time in Lisbon 18:44
Athletics Ireland confirm nine sessions for National Championships 18:02
Trump prefers Jordan to James because ‘he wasn’t political’ 16:45
Here is your handy guide to sport on television this week