Rory Best, Ruan Pienaar and Dan Tuohy all out for a number of weeks after Heineken Cup exit 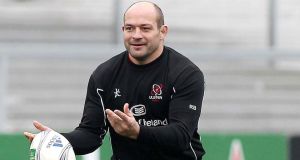 Ulster’s defeat to Saracens in the Heineken Cup quarter-final at Ravenhill looked even costlier today when the province released a lengthy casualty list that threatens to scupper their ambitions in the RaboDirect Pro12 League.

Ireland hooker Rory Best suffered a sprained ankle and had to be replaced early on in the game by Rob Herring. He will be out for between six and eight weeks, which at this point would make him doubtful to play again this season or make Ireland’s summer tour to Argentina.

Dan Tuohy fractured his hand and will have surgery this week. His return date is sometime in May, a timeframe also given for backrow Roger Wilson, who sustained a fractured a thumb.

Scrumhalf Ruan Pienaar was diagnosed with a recurrence of his shoulder AC joint problem and will be sidelined for six weeks.

Tighthead prop John Afoa tweaked a disc in his back and will miss this Friday night’s game against Connacht in Belfast, while Ireland wing Andrew Trimble suffered a concussion and will now follow the normal return to play protocols.

Fullback Jared Payne, who received a red card from referee Jerome Garces following his collision with the airborne Saracens fullback Andy Goode, will be called to attend an independent disciplinary hearing at ERC’s behest in Dublin on Wednesday.

Munster’s victory coupled with the quarter-final defeats suffered by Ulster and Leinster means the IRFU will receive meritocracy payments from ERC of €1.8 million, a figure that will increase should Penney’s charges make the Heineken Cup final.

Defeats for Leinster and Ulster denied IRFU around a further €1.2 million.