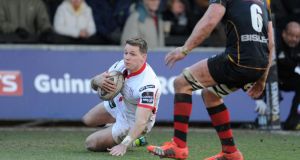 This try against the Dragons was one of five in Craig Gilroy’s last four games for Ulster. Photograph: Ian Cook/Inpho.

Craig Gilroy is normally a chilled spectator but during the course of last Saturday’s Six Nations three-game box set, his demeanour was a great deal more animated. Even the dog, his sole companion, noticed.

Apart from the natural emotion of wanting to be part of Ireland’s triumph, the just recently turned 24-year-old international, appreciates that wistful or wishful thinking won’t suffice and more tangible actions will determine how soon he returns to the Test arena.

In fairness, his task could be filed under ‘more of the same.’ He’s scored 10 tries this season, five in his last four games, and has arguably been, along with Luke Fitzgerald and Keith Earls, a leader in the in-form Irish backs category, in the Guinness Pro12.

He’s presented that quality for scrutiny while playing wing and fullback, scoring a brace of tries from the latter position in his most recent outing – albeit a losing one to the Dragons at Rodney Parade. Gilroy’s eye-catching displays have been underpinned by his appetite for graft.

He explained: “I have been working very hard on all areas of my game. I’ve been doing the extras after training and the knock-on effect can be seen in matches. It gives you confidence. I enjoying playing fullback as you do get more ball. It’s an exciting position for that reason and it allows me to use my kicking game, another area that I have been working on.

“From an Ireland perspective Joe [Schmidt] doesn’t need to fix what’s not broken. They won the tournament. It’s up to those of us who weren’t involved to make a case based on the way you’re playing.”

The vehicle for comparison will be a kind of mini-interprovincial series. Ulster play Connacht, Leinster and Munster in three of their last five league matches.

Gilroy admitted: “Joe [Schmidt] is very detailed in what he does so he will be watching all the matches but there’s no doubt that the interpros will give him an opportunity to compare. You are playing against guys who you are competing with for the green jersey.”

First there is the Friday night’s game against the Cardiff Blues at a Kingspan stadium where Ulster are unbeaten all season. Neil Doak’s team currently lie in second place, ahead of provincial rivals Munster on points’ difference and four behind leaders, Glasgow. Ulster must play three of the top five sides in the table on the run-in.

The Cardiff game is a sell-out and Gilroy acknowledges the importance of rekindling the momentum of four consecutive victories before the surprising setback last time at Rodney Parade. “I’ve had my feet up for the last while so I’m just itching to get back out there.”

Paddy Jackson returned to competitive action with some game time for the Ulster Ravens against Munster A and should be available for Cardiff, while another elbow injury victim, Stuart Olding could be in line to return on Friday night in Belfast.