Stephen Ferris makes his first start in 16 months at Murrayfield 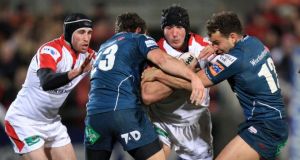 Ulster’s Stephen Ferris is tackled by Scarlets’ Adam Warren and Olly Barkley on his return for the province in last week’s RaboDirect Pro12 game at Ravenhill. Photograph: Darren Kidd/Ipho/Presseye


From there to here brings a radically different perspective. Ulster Rugby, as an entity, has transformed significantly these past 12 months.

For one, Stephen Ferris is playing rugby again and, secondly, Ravenhill is looking like a modern and almost finished stadium in time to welcome the raiding Saracens.

The only concern is whether Ruan Pienaar can make it back for that Heineken Cup quarter-final on April 5th.

Pienaar damaged his A/C joint during last Friday’s 26-13 defeat of the Scarlets and is struggling to regain fitness.

Last season in the corresponding fixture at Twickenham, Ulster went toe to toe with the English juggernaut and were soundly beaten.

This time around they should have a wildly different attitude, presuming Ferris’ recovery stays on track in this, his first start in 16 months.

The same can be said for Tommy Bowe – three tries in his two return matches – while Johann Muller also appears to be suitably patched up for his last emotion-fuelled lap as Ulster captain.

There is also a hope pervading across Irish rugby that Luke Marshall’s re-acquaintance with concussion a year after his first succession of head traumas is at and end.

If the haziness has passed his exciting young partnership with Paddy Jackson, another figure so clearly bolstered by Joe Schmidt’s faith in him since November, can ignite even on the shredded Murrayfield turf.

Swashbuckling
Tonight also represents a significant outing for Craig Gilroy as Andrew Trimble will come swashbuckling into the team in Cardiff on Saturday week.

But Gilroy can still make the bench for Saracens.

Coach Mark Anscombe has gone all South African (or is that French?) with six forwards on his bench and just two backs.

That’s as much to accommodate the growing number of backrowers at his disposal. Robbie Diack and Nick Williams – having been internally disciplined for going AWOL – can bring an increase in the physicality Ulster base so much of their game around.

Roger Wilson is at number eight, which indicates a home-grown backrow with Ferris and Henry is the goal when they go to war with Saracens.

Ferris’ return is being closely monitored and he may be of greater value as an impact. He won’t play the 80 minutes tonight unless it is necessary.

Rory Best, like Henry and Trimble, is given the week to recuperate after his Paris heroics.

The game also matters in the context of earning a Pro 12 home play-off as either Munster or Leinster will reduce the other’s lead over Ulster in the league next weekend.

The return of Ferris and Bowe – Grand Slam men in 2009 – along with 2014 championship winners in Henderson and Jackson makes it hard to see past an away victory.