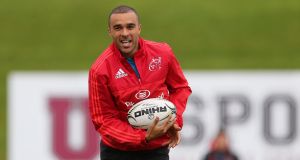 Simon Zebo starts on the right wing for Munster on Friday night as they take on Ulster in the season’s first inter-provincial clash at Thomond Park.

Anthony Foley has made seven changes to his starting XV following last week’s defeat away to top of the league Scarlets.

Tomás O’Leary is set to make his first start since his return to the province and is joined at halfback by Ian Keatley, while Jack Donoghue comes back into the backrow and Francis Saili makes his first start alongside Denis Hurley in the centre.

Donnacha Ryan is named among the replacements, with new signing Maria Sagario in line to make his first start for the province off the bench.

Meanwhile Darren Cave and Paddy Jackson have both been named in Ulster’s tarting line-up for the clash at Thomond Park.

Cave and Jackson are two of four changes made by Neil Doak as he rotates his squad after a week which saw it confirmed he will be without Tommy Bowe for six months and Iain Henderson for six weeks.

The other two changes see Peter Nelson return to the side at fullback and Andy Warwick replacing Callum Black at loosehead prop as Ulster look to build on last Friday’s win over Cardiff .

Chris Henry, who started Ireland’s 43-20 Rugby World Cup final defeat to Argentina, has been included on the bench, while Craig Gilroy, Andrew Trimble and Stuart McCloskey all start.