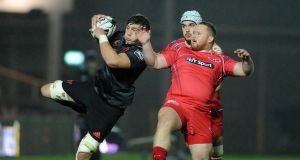 Munster let a 10-point lead slip as Steven Shingler’s last-gasp penalty condemned them to a first defeat of the season in the Guinness Pro12.

Anthony Foley’s men were never behind until Shingler stepped up with 80 minutes played to emphatically seal the win from just inside the Munster half.

It meant Andrew Conway’s try and 17 points from the boot of outhalf Ian Keatley, called in at the last minute to replace injury victim Tyler Bleyendaal, were not enough to make it five wins from five.

It had all started so positively for the visitors with Keatley kicking an early scrum penalty before Conway finished superbly, swooping on a Regan King error to hack ahead and beat the cover to the score.

That made it 10-0 and the size of the advantage remained intact as the two number 10s exchanged penalties before the break.

But Shingler pulled another three points back on the stroke of half-time to keep the hosts in contention and they made the most of it.

Shingler missed the conversion and Keatley kicked a penalty, but the Scarlets were soon level when Conway and Stephen Fitzgerald got in each other’s way dealing with a King grubber and Williams punished them by dotting down.

The hero turned zero when he was binned for a high tackle seconds later and Keatley, in between coming up short with two-long-range penalties, dropped a goal to put the visitors back in front.

The final quarter ebbed and flowed one way and the other as the tension and penalty count racked up.

Shingler levelled, but Keatley looked to have sealed the win with a three-pointer of his own seven minutes from time.

However, his opposite number kept his composure to first claw the Welsh side level, before landing the killer blow.

1 Shock at golf clubs as sport faces shutdown in Level 5
2 Level 5 golf shutdown: Ireland one of few countries to close courses
3 GAA scrambling to deal with GPA demand for ‘baseline testing’ of all county panels
4 Philip Reid: Hard to find the sense in closing golf clubs
5 Dan Martin toasting another stage win at the Vuelta
Real news has value SUBSCRIBE