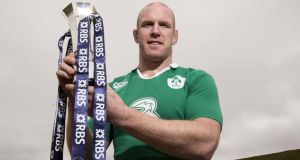 Munster coach Anthony Foley said he is happy to bring a long recruitment drive to an end and finally clinch the signature of All Black Francis Saili for next season.

Saili is expected to join up with his new colleagues after the end of the World Cup in October, or earlier if he misses out on selection for the New Zealand squad. Foley is thrilled to have sealed the deal for the utility back.

Geographical constraints meant he has yet to meet the Blues centre, but he has spoken with the twice-capped Saili via Skype and said he’s hungry for the move to the Thomond Park outfit.

“Yeah he’s a very exciting player. He’s got a lot of skills that will excite people. He’s got the attributes that will help him excel up here in the northern hemisphere,” Foley said.

“It’s been a long process and we’re delighted to have him on board.”

Foley said Munster were still on the look out for “quality players” and that they still had some transfer business to “tidy up”, but in the short-term Foley has been boosted with as strong a squad to chose from as he has had in his tenure ahead of Saturday’s Pro12 tussle away to Edinburgh.

Paul O’Connell, Conor Murray and Peter O’Mahony are expected to line out for the first time since their successful Six Nations campaign, while fellow internationals Dave Kilcoyne, Tommy O’Donnell and Ian Keatley are expected to feature.

Donnacha Ryan (concussion) and James Cronin (knee) both played a full part in training at Cork IT yesterday, while Mike Sherry (shoulder and knee) and Tyler Bleyendall (neck) are close to returns said Foley.

“Mike was at training today, we’re still hopeful we can get him back. Tyler has stepped up his levels as well and hopefully we’ll see him before the end of the year.”

Foley poured cold water on concern over Keith Earls’ fitness after the Munster centre sat out the last 30 minutes of training.

“Keith’s fine. It’s just ongoing with him, he’s got to be managed from day to day so it’s all good.”