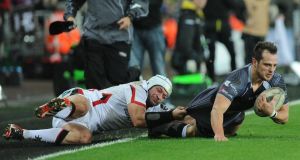 Something had to give when the league’s best attack faced the top defence and unfortunately for Ulster, it was their tackling that wilted in the face of Ospreys adventure on Saturday.

For the second time in six days, Neil Doak was left to count the cost of defeat in west Wales.

Having suffered what is almost certainly a terminal blow in the Champions Cup at Scarlets the previous weekend, Ulster missed the chance to go top of the Guinness Pro12 at the Liberty Stadium.

However, the added failure to either deny four tries to Ospreys, who will spend Christmas Day in top spot, or clinch a consolation bonus of their own leaves Doak’s side outside the play-offs and sandwiched between Leinster and Connacht who they face in their next two games.

Captain Rory Best said: “It’s still very tight at the top so we are very disappointed to come away from this game with nothing and give them five points. Now it’s massively important that we have a big response next week against Connacht.

“We’ve got a big couple of weeks coming up. We want to stay in that top four but that means playing a lot better than we have over the last couple of games.

“We are hugely disappointed but we haven’t lost any confidence in what we’re doing. We just have to do the basics far better.

“We didn’t look after the ball well and our tackling let us down. We got into good shapes but we were soft at the gainline. We either missed or just soaked up the Ospreys and didn’t knock them down.”

There was a small handful of positives for Doak to cling to. Having seen tighthead Declan Fitzpatrick penalised off the pitch at Parc y Scarlets, the scrum was much improved while Ulster dominated the lineout.

That merely added to the frustration at squandering two attacking opportunities when both Ruan Pienaar and Ian Humphreys failed to find touch with penalties.

Pienaar left the Liberty Stadium with his troubled right knee wrapped in ice after he was forced off at half-time, however the early signs were encouraging.

Given their current list of injuries, Ulster can ill-afford to lose Pienaar’s influence at this crucial time, though his replacement, Paul Marshall, was instrumental in galvanising his side in the second-half against Ospreys.

The final 20 minutes also showed promise but, again, added to the sense of frustration. At 31-6, Ospreys were guilty of banking on the win but Ulster’s set-piece delivered.

Rob Herring finished a lineout drive before the scrum earned a penalty that set up Tommy Bowe to mark his first appearance at his former home ground with a blistering score.

Ulster chased a losing bonus, or possibly even more, in the final 12 minutes that would have struggled to justify but their general sloppiness again proved their undoing.

“We are very disappointed and are going to have to pick it up after Christmas,” admitted Bowe.

“The league is very competitive this season and it is going to be very hard to get into the top four this year. We have a bit of work to do but we will be there and thereabouts at the end of the season

“We will go away, look at ourselves and come back stronger, especially with a lot of faces to come back from injury.”

Ulster were briefly on level terms early in the game but Ospreys exploited space on their left flank as Hanno Dirksen, Ashley Beck and Josh Matavesi made yards. Pienaar and Best both prevented tries but the Ospreys ability to play the ball out of the tackle meant Ulster simply ran out of defenders.

Wales halfbacks Dan Biggar, who finished with 16 points, crossed first before Rhys Webb scored his 10th and 11th tries of the season for club and country, and Dirksen completed the rout.

Ulster felt aggrieved over two decisions by the fourth official that went against them, but there were few arguments about the result.