Attempted All Blacks test was Eddie Jones motivated, not ‘economics’

‘The only reason for having this match was because Eddie wanted to. This wasn’t driven by economics’ 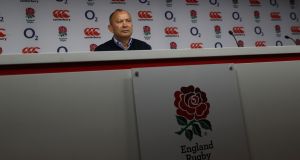 England’s attempt to arrange a fixture against New Zealand this autumn was motivated by a request from Eddie Jones and not commercial opportunism, according to the Rugby Football Union.

Talks over the additional fixture that would have been staged at Twickenham on November 4th thended when the All Blacks declined the offer, instead preferring the clash with the Barbarians that had already been pencilled in for that date.

England and New Zealand are not due to collide until autumn 2018, ending the four-year gap between the top two teams meeting that is a frustrating quirk of the international fixture list.

The RFU has been accused of viewing the game as a way to raise additional revenue in a year when only three Tests are to be staged at Twickenham in November, but chief executive Ian Ritchie insists it was born out of the desire to face the world champions.

“I felt there was an opportunity to have a discussion with (New Zealand chief executive) Steve Tew whether or not we can play the All Blacks,” Ritchie said.

“I’d have been failing in my responsibility if I hadn’t explored the possibility of an All Blacks game bearing in mind we haven’t played them since 2014 and bearing in a mind it’s the game that everyone wanted to see.

“I had discussions at the behest of Eddie, not because of any economics. The only reason for having this match was because Eddie wanted to have it. This was not driven by economics.

“Was it possible to organise and was it the right thing to achieve that for the fans, because Eddie wanted it and the opportunity was there.

“It came up in conversation — I asked Eddie if he wanted to play this game if there was a possibility of doing it, even if it was difficult to arrange because of the economic discussions needed. Eddie said yes, absolutely.

“It was a New Zealand choice of whether they wanted to play us or the Barbarians.”