O’Connell sees Ulster as springboard to Argentina and beyond 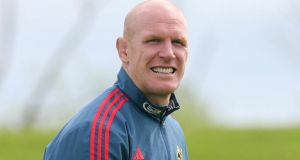 Paul O’Connell is healthy now and is working hard to keep it that way, in order to be ready for Ireland’s tour to Argentina and the upcoming season. Photograph: Lorraine O’Sullivan/Inpho

Perhaps because of his force of nature personality it’s almost counter-intuitive to hear the Munster and Ireland second row speak of the next stage of his career in terms that are vigilant and circumspect.

Blighted by injury in recent years, the 34-year-old is plotting the end of this season, pre-season and a World Cup year more cautiously than he ever has.

Ulster this weekend will be the first of a run of games that O’Connell hopes will lead to a RaboDirect Pro 12 league final.

From that springboard he hopes to go on Ireland’s summer tour to Argentina. He has missed too much to miss that.

Resting and kicking back is not on his schedule and Toulon in the Heineken Cup remains a fresh cut. A reminder to take now what he can.

“I was bitterly disappointed because I know I won’t get many more chances,” he says of the defeat in Marseille.

Disappointing
“You don’t mind sometimes when you play great stuff and get beaten. But to go out and just not perform was really disappointing. I know we dug in and got back into the game and all that. Even though we were playing badly, we were trying our hearts out.

“I’m sure plenty of the lads will be saying that they’ll have a few more shots at this, which is a thing to say after you’ve played badly. It’s just that I don’t know how many opportunities I’ll have to play in a Heineken Cup semi-final.”

O’Connell is healthy now but the memories of the infected pubis bone that melted patience has left a mark. This season has been kind but he had an early hamstring problem, missed a match before Christmas and didn’t line out against Scotland in Ireland’s Six Nations opener because of illness.

“I certainly want to go and play,” he says of the Argentina tour. “I’ve been really well managed and I think you just get better and better when you’re playing. If I can just have a good pre-season I think I’ll be in a really good place this year. So I’m eager to go.”

His last proper pre-season training was before the World Cup in 2011. A recent conversation with Jason Cowman, the IRFU’s strength and conditioning coach, reinforced the view that work done before the competitions begin has a lasting effect and avoiding long term injury pays significant profits.

“It (injury) plays on my mind. I chatted to Jason Cowman only last week about it and he was saying he has a theory that the more pre-seasons you can accumulate back to back, the more conditioned you will be.

Sluggish
“There’s times this season where I have felt really sluggish and I can feel the fact I haven’t had that pre-season work in me but putting in a season of 25, 26 matches . . . if I can put that together with a good pre-season it will put me in a really good position for next year.”

Unless Munster get to the Pro12 final there will be a three- week break before Ireland fly out. Again that doesn’t suit the player O’Connell has become. For Munster and his own personal preference, a league final for him means continuity of playing. No long gap.

O’Connell also looks at Rob Penney’s last few games and how much the coach has brought. He singles out Penney, Warren Gatland and Joe Schmidt as three who have enhanced him as a player. O’Connell’s requirements and Penney’s send off are all in the mix with Ulster fury.

A season arriving at tipping point and as O’Connell knows with Munster, Ireland and with himself, it is the small margins that will always tell in the end.