Munster bolstered in Pro12 by return of Ireland players 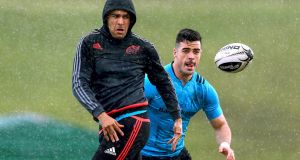 Simon Zebo and Jordan Coghlan: Munster will be aiming to get the basics right and build platform for the three-quarter line. Photograph: Donall Farmer/Inpho

The aesthetics of victory are far less important than simply winning as Munster look to re-engage purposefully in the scramble for the end-of-season Guinness Pro12 play-off places.

The importance of last week’s narrow triumph in Italy may become more relevant if the home side can muster a run of victories starting in Limerick tonight.

Simon Zebo and Tommy O’Donnell have been released from the national squad and are two of three changes made by coach Anthony Foley; the other sees hooker Niall Scannell in the starting line-up.

Long-term injury victims Stephen Archer and Johnny Holland are included among the replacements. Archer’s availability – out since October with a neck injury – is timely as Mario Sagaro is away with Uruguay, playing in the Americas Championship against the USA in Montevideo.

The Cork prop is set to make his 100th appearance for the province when introduced from the bench.

Jack O’Donoghue gets a chance to play in his favoured position of number eight and it will be interesting to note what sort of impact the talented 22-year-old Waterford man can make.

They did beat Munster when the sides met earlier in the campaign at Rodney Parade and beat Leinster at the same venue in what was their last victory in the league. The four matches they lost in the interim have been by fewer than seven points.

Munster will be aiming to get their own performance right, with solid basics and a decent platform from territory and possession, as there is plenty of ability in the three-quarter line. The importance of the senior players and internationals setting the tone and taking responsibility cannot be overemphasised as Munster seek to recapture lost ground.