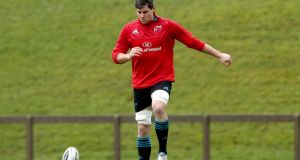 For both sides it’s a matter of who can patch up better. Munster have five on international duty while Ospreys have eight. In that pre-game match up Munster seem to have fared best.

They are also playing in a ground that has been kind to them. While the province have lost their last two games in Thomond Park against Connacht and Leinster, in Musgrave Park coach Anthony Foley’s side have won 12 in a row going back to a defeat by Cardiff three years ago.

Foley has made four changes to the side that defeated Zebre 12-16 in Italy two weeks ago with a couple of those strengthening the frontrow.

Loosehead prop Dave Kilcoyne and hooker Mike Sherry both make their return alongside John Ryan who remains on the tighthead side, having played on the loosehead side for much of last season.

Ryan has had an interesting progression. He began at loosehead with Christians, having moved to prop from number eight. At UCC he then moved to tighthead.

The only change across the backline comes at scrum half with Duncan Williams returning to partner Ian Keatley.

Rory Scannell and Francis Saili renew their centre partnership for the seventh consecutive game, while Development prop, Peter McCabe, a product of the Munster Clubs pathway, is included in his first PRO12 squad among the replacements.

“Make no mistake about it we are still in this race,” said Ospreys coach Steve Tandy.

“The PRO12 is tighter than ever and we know that with results this season showing that everybody is capable of beating each other, there is everything left to play for. Anything can happen and you can expect to see plenty of movement in the table over the next few weeks . . .”

Munster are one place above Ospreys on the table but at sixth they need to start climbing even with 10 matches to play. That at least is how Tandy is motivating his side. With just 30 points to Munster’s 36, this is a must-win match for the Welsh side.

“For us it’s about us looking at the remaining fixtures as nine battles that we’ve got to be up for week by week if we are going to achieve our overall aim, starting in Cork on Sunday against the team who are one place above us,” added Tandy.

“ We’ve got an exciting young group.They understand what is expected of them within our culture, are striving for excellence and are relentless in what they do. With experience around them in key positions that’s a good mix and the boys are looking forward to the challenge.”

Today though just one way, the Munster way.