Leinster coach knows they will have to be “really, really good” to beat Munster at the Aviva Stadium 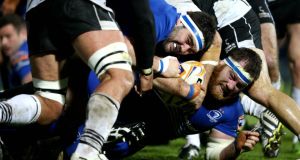 Leinster’s Martin Moore and Michael Bent (right) in action against Zebre at the RDS. “If required Mike will do a really good job,” said Matt O’Connor yesterday.


There’s a theory about that the heat might have gone out of the Leinster-Munster rivalry in recent years, but with the game already set to break all League records due to tomorrow’s 50,000 sell-out at the Aviva, it has hardly required the help of Don King to promote the latest squabble.

As in 2006 and ‘08 there also remains the possibility of Leinster and Munster meeting in the Heineken Cup semi-finals, and/or of them reprising their League final clashes of 2001-02 and 2010-11, which would return them to the heightened stakes of those affairs.

But if this is to be their last meeting of this season, then the one person who has ratcheted up the ante in the build-up to tomorrow’s game is one of the fixture’s biggest fans, Rob Penney.

In response to his billing of this game as Munster against the Six Nations champions, his Australian counterpart at Leinster, Matt O’Connor, yesterday ventured: “I think Paul O’Conell and Conor Murray and Peter O’Mahony will be quite disappointed with that statement, if it was me. But it’s a bit of banter, isn’t it? It’s not a biggie. It’s not motivating us. We know that we have to be really, really good, and that’s the bottom line.”

Penney also expressed the fear that as bulk suppliers to Ireland’s Six Nations title win with up to 17 players, Leinster may be more match-hardened than his side, a point which O’Connor by and large concurred.

“They’re pretty fresh to be fair – they’ve been well managed through the Irish campaign and the week off last week has given them a real buzz in the environment.

“We found post-November and after the Australia and All Black game in particular – playing in that intensity is an advantage,” said O’Connor, and Leinster’s 40-7 win at Northampton in early December would tend to verify the point.

Their recent Irish exertions have come with a toll, however, and O’Connor admitted that an array of props, Cian Healy, Jack McGrath and Marty Moore, are all carrying knocks, in addition to the sidelined Tadgh Furlong, which makes it unlikely any will start at any rate given next weekend’s Heineken Cup quarter-final away to Toulon.

Admitting that McGrath’s collarbone injury made him particularly doubtful, O’Connor said: “We’ve been lucky that Michael Bent has played there for us and done a really good job in the Test window. If required Mike will do a really good job.” He also admitted “we won’t risk anyone” given “we’ve got to have an eye on next week too.”

‘Perfect guy’
The late injury-enforced appointment of World Cup final referee Alain Rolland ensures a first Leinster-Munster match in modern times for the ex-Irish and Leinster scrumhalf. “I think he’s the perfect guy to referee,” said O’Connor, who has a fair idea of the storm Munster are intent on brewing up for a match which will leave the winner atop the table and favourite to secure home advantage in the knock-out stages.

“We rarely have an issue making sure we bring the passion and intensity to the contest,” said the Leinster coach. “That’s probably down the list of priorities. This Leinster team, over a period of time, have always demonstrated that level of passion and that level of desire to play for each other, so that won’t be the focus.

“The detail, and trying to get the things that we can control right is really really important, because if you don’t get those right against Munster, they will strangle you and they will win the game. It’s about us delivering on what we need to deliver on and making sure we don’t give them easy passage into the game, and about making sure we are very good at doing what we want to do in the game.

“They want to beat us up, they want to get into it physically, they want to make it impossible for us to play at them. Now the challenge for us is to make sure we are accurate enough, we control the ball and we are disciplined enough and we deliver on all the things we want to deliver on.

As with Marty Moore and Rhys Ruddock before him, it is understood that Dave Kearney has agreed a new two-year deal with his native province, and that Leinster will confirm the completion of their re-signings at some point next week.

Brandon Nagy reels off 10 birdies to lead at American Express 06:41
Defeat to Burnley ‘a massive punch in the face,’ says Klopp 06:34
Australian Open: Tennis stars should quarantine their vulgar display of entitlement 06:00
Colm Cavanagh believes Tyrone will benefit from ‘fresh approach’ 06:21
FAI chief says Uefa still intend to stage Euros at 12 cities 06:00
Here is your handy guide to sport on television this week