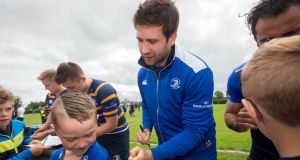 Both Marty Moore and Tadhg Furlong have been ruled out of Leinster’s pre-season match against Ulster in Belfast on Friday. Moore is still expected to be fit enough to feature against Wales on Saturday week and be included in the Ireland’s World Cup squad.

However, the tighthead prop is not being risked this weekend as he continues to recuperate from two shoulder surgeries last season.

Isaac Boss is another Ireland player not included in Leo Cullen’s first squad as head coach.

Cullen has named Kevin McLaughlin as captain for the World Cup period but it remains unclear whether Jamie Heaslip will regain the captaincy in November.

“I think this is a great opportunity for Kevin,” said Cullen. “He had an unlucky run with injuries last season and I know he is very keen to hit the ground running this season.

“This is by no means a new role for him and we saw last season what he brings to the table in terms of his captaincy. He has really driven the environment during the pre-season and he is a great role model for the younger players and indeed the wider squad.”

Regarding how quickly he acceded to the role of head coach, having only retired in 2014, Cullen said: “I was very fortunate that, when I finished playing, Matt O’Connor offered me a position in his coaching team. I wasn’t really sure what I was going to do post playing. I thought I might play like Brad Thorn into my early forties. Unfortunately my body’s not quite as resilient as his.

“I was very fortunate to have that opportunity to get into the coaching world. I’ve learned a huge amount from last year and I’m learning all the time. It is quite soon in my career as a coach, but it’s too good to turn down.”

“There is a huge challenge here, I am under no illusions, but we have a lot of good people working here and I am going to lean on a lot of those people.”

Meanwhile, Darren Cave has been named at outside centre by Ulster coach Neil Doak, while Craig Gilroy will start on the right wing. Hooker Rob Herring, who was cut from the initial Ireland squad, will captain the team.