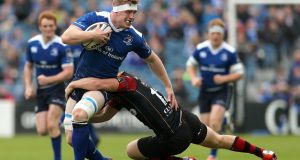 Leinster boss Leo Cullen has made five changes to his side for the province’s trip to play top of the table Scarlets in the Pro 12 on Friday night.

With Rhys Ruddock being called up to the Ireland squad for Sunday’s World Cup quarter-final against Argentina, as Joe Schmidt looks to plug the gap left following Sean O’Brien’s ban, Dan Leavy starts in the backrow alongside Dominic Ryan and Josh van der Flier.

Meanwhile Tom Denton moves back into the secondrow in place of Mike McCarthy, who has also joined up with the World Cup squad.

There are no changes to the back three with skipper Isa Nacewa, Garry Ringrose and Fergus McFadden all starting, while Colm O’Shea replaces the injured Ben Te’o in midfield.

Ross Byrne, the Irish under 20s starting outhalf last season, takes the number 10 jersey and is partnered at halfback by Isaac Boss, who is winning his 125th Leinster Cap.

The Scarlets have handed a debut to Canadian World Cup star DTH van der Merwe, who scored a try in all four of his nation’s group games.