Leinster made to work hard for their reward 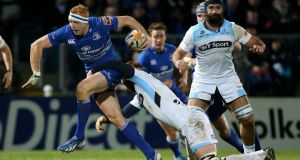 Leinster went top of the Pro 12 league with an efficient if unimpressive victory with Martin Moore’s hand injury the Luke Fitzgerald’s no-show the only concern from an Ireland perspective.

Fitzgerald was conspicuous by his absence as a recurrence of his abductor muscle problem ruled him out about an hour before kick-off.

It almost certainly spoils his chance of being in Joe Schmidt’s plans ahead of Italy’s visit to Dublin next Saturday. In stark contrast, Tommy Bowe crossed for two tries on his return from injury in Belfast on Friday night. Sam Coghlan-Murray was the late call up, alternating wings with Darragh Fanning to good effect.

What initially looked set to be a cake walk descended into – and pardon the mixed metaphors - a bar room brawl until Leinster eased into a 21-12 lead after Fanning crossed for their second try in the corner on 36 minutes.

Leinster started well with Noel Reid splitting through a fickle Glasgow midfield in the sixth minute. The line break was sparked by Sean Cronin carrying into two men before a neat offload put the centre away. Reid really should have been grounded with Niko Matawalu’s tackle no real tackle at all.

Madigan converted and Leinster were away.

Or so it seemed. Jack McGrath may well wince on seeing the repeat of Richie Vernon’s first try as Glasgow outhalf Ruaridh Jackson fended off the prop before releasing his centre. Finn Russell’s conversion levelled it up.

Ian Madigan did nudge Leinster back in front on 18 minutes with a penalty but the outstanding back on show was Zane Kirchner. If the Springbok fullback wasn’t booming a 60 yarder down the narrowest of touchline channels he was breaking the more stringent Warriors defence with a brilliant flick pass for Fanning’s try.

In between that Vernon went over again after Tommy Seymour danced past Fanning, only to be denied the try by Coghlan-Murray’s efficient tackle. Glasgow switched the point of attack with Matawalu streaking clear, only to be denied a certain try by Jordi Murphy’s last ditch grab. But the space was visible wide left and Vernon got the job done.

What usually happens at this juncture is they pull clear and the crowd awakes from their slumber long enough to inspire a bonus point try before the finish. Usually. The 8.30pm kick-off ensured severely depleted numbers around the old Horse Show ground.

Glasgow actually regained the lead when Matawalu was adjudged to have grounded the ball after Nigel Owens referred the action to the TMO. Russell’s conversion made it 21-22.

In came Mike Ross for Martin Moore and along with him Richardt Strauss and Isaac Boss.

It took until the 63rd minute for Rhys Ruddock to muscle over for Leinster’s third try. Madigan’s touchline conversion was important in the context of the match but also for his chances of featuring for Ireland next weekend. His was an assured performance, missing just one from six kicks at goal.

Again, the expectation was that Leinster would move up the gears and secure the bonus but the game was not won yet. When Owens penalised Strauss and the otherwise impressive Dominic Ryan for not releasing Russell made it a three-point game.

But that’s how it remained.