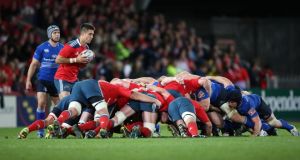 Munster have made 10 changes from last week to the side that travels to Aviva on Saturday to face Leinster in the Pro12 derby.

Captain Peter O’Mahony joins several other international players making their return, among them Tommy O’Donnell, Conor Murray and Paul O’Connell, whose shoulder niggle has cleared up.

Irish winger Dave Kearney, who took a knock in training, and back row Rhys Ruddock, who is nursing a calf injury, are not being risked with the Heineken Cup quarter-final match next week against Toulon taking priority.

Jamie Heaslip is back captaining the side along with Kevin McLaughlin and Shane Jennings in the back row, Jordi Murphy starting on the bench.

The Leinster backs, however have a familiar look with Luke Fitzgerald and Fergus McFadden on the wings, Gordon D’Arcy and Brian O’Driscoll in the centre and Rob Kearney forcing Springbok Zane Kirchner to the bench.

Ian Madigan is also the preferred starting outhalf to Jimmy Gopperth with Eoin Reddan at scrumhalf.

Munster’s Ian Keatley, who was man of the match when his team beat Leinster 19-15 at Thomond Park in October takes up the outhalf position alongside Conor Murray. With 497 points in 67 appearances, Keatley is hoping to break the 500 point mark.

Donncha Ryan misses the match and is now wearing a protective boot after a specialist identified a strain under his right foot. An uncommon injury, Ryan will need to be monitored and could miss Munster’s Heineken Cup quarterfinal against Toulouse next week.