Kiss: Ulster need tweaks to improve show on the road 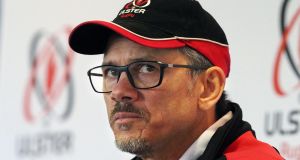 Ulster director of rugby Les Kiss: It’s getting tougher with English clubs getting salary cap rises. It’s going to be like a shark pool for talent so we want to have an environment that people want to stay in.” Photograph: Inpho

Les Kiss, just his second day in the job and he still can’t shake off Argentina. As he adjusts from life at international level and the World Cup valley of tears to the more mundane Ravenhill Road and Pro12, Kiss faces into an Ulster winter with a softly, softly approach to change.

It has always been that Kiss would slip into the Ulster helm after RWC 2016 with Neil Doak all along tasked with doing the holding job. But on Monday in his first press conference in charge, Kiss was adamant Ulster needed tweaking and direction as well as a more robust shape to their game, one that could withstand the pressures of away games, more than sweeping change.

In the past, games on the road have been no friend of the province. Last season Ulster lost six matches in the regular Pro12 league. All of them were away from home. Glasgow then beat Doak’s side 16-14 in the Scotstoun playoff.

“We certainly have the potential to develop something that is a little more reliable in terms of what we put out,” said Kiss. “At home we’re very good. Talk about going away and the away form . . . it’s something I’ve to get my head around and see what’s working, what’s not working there. I don’t think it’s one thing. I think it’s a collective thing.”

Careful not to jump in and make demands, Kiss knows that the competition is getting stiffer and less predictable. Not only France offer the threat of bulging wallets but also the English club owners, Northampton the most recent franchise to sign a big name for next season, the French number eight who rocked Johnny Sexton in the World Cup, Louis Picamoles.

There’s an understanding that structure is king in every club. But winning is more so, this week against Newport and then, more importantly the first Champions Cup match away to French side Oyonnax.

“You want to make sure you are the right end of Pro12,” he says. “You need to be there in order to advance in terms of the competition we want to be in that top echelon and stay in the European competition for the following year.

“I also expect that by the end of the year we have developed a game we can play in a number of conditions and that we’ve exposed a few younger guys to competition. It’s a dog eat dog world out there. It’s getting tougher with English clubs getting salary cap rises. It’s going to be like a shark pool for talent so we want to have an environment that people want to stay in.”

“That 20 minutes [opening against Argentina], it certainly got us. It was a big hit to take. It would be wrong to jump into knee jerk reactions,” says Kiss.

“We had a mini review last week. We were common sense about it all. You can invent things that are a problem. I think it would be remiss to jump to conclusions and say there are a lot of things wrong. You don’t win two Six Nations without a lot of things being right. I don’t think the gap is as big as it is made out to be. But its looks big and a little thing can be a big thing.”

He hopes players like Paddy Jackson, Stuart Olding and Neil Henderson, from the younger ranks, will emerge as leaders to join Rory Best and Chris Henry. He knows Ulster are a frustrated team, who struggle to put games away. But this is week one and balance is the key.

“What I’ve tried not to do is look at it in a judgmental way,” says Kiss. “I just observed and saw what trends and habits were exhibited on the pitch. I’m here for three and a half or four years. I want to put something in place to show leaders are coming through the system.”

Connacht coach Pat Lam may hold a similar view of Robbie Henshaw, who is available for him on Friday against Treviso. The Irish centre is back a week before Connacht travel to Siberia for their first round Challenge Cup match against Siberia’s Enisei-STM.

John Cooney and Shane Delahunt are also available as is Tiernan O’Halloran, who passed his head injury assessment tests, while Danie Poolman, Fionn Carr and Ben Marshall are in different stages of injury rehab.