Doug Howlett has no doubt about Munster’s motives 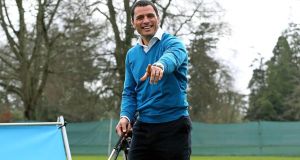 
Commercial manager with Munster and with business interests in mining, Doug Howlett has stepped away from rugby since retirement but not so far back he can’t see.

The former All Black winger is looking in this week but admits Munster are building towards their Heineken Cup quarter-final, a match with potentially more terminal appeal and this week overshadowed by the Aviva experience.

“I was 15 years at it. I played in a lot of the big games. There’s not much more I wanted to achieve,” says Howlett. “These occasions are great to be part of but I get just as much enjoyment out of Keith Earls taking the field in the number 14 jersey. Maybe a small little bit of me helped him along his way for Munster.”

‘An observation’
More at the end of the phone now than the training paddock, Howlett does not believe Rob Penney’s quip about Munster facing the Six Nations champions was deliberately provocative.

“I don’t think that was intentional. I think it was more of an observation,” he says “Like all Irish teams I think they operate better when they are backed into a corner and they have to come up with the performance.”

A player who scored 49 tries in 62 Tests for the All Blacks, won a Heineken Cup in his debut Munster season, Celtic League titles in 2009 and 2011 and scored 35 tries in 114 games over five and a half seasons knows what nervous meetings like Saturday’s bring. The regular international Munster players are required to lead.

‘Major Challenge’
“Stripped down, it is another game of rugby played on the same dimensions as any game of rugby and if the players can keep it that way they can handle it,” he says. “You come into these environments and you rely on the experienced people around you. Paul O’Connell, Peter O’Mahony, Conor Murray – they’ve all played international rugby.

“Knowing Rob Penney, he’ll be preparing the team for the environment. That’s the major challenge for the team, they know they can do it but to do it on the day in such a big environment will be the challenge.”

There’s has been a swing in strengths between the teams. Howlett sees a motivating factor for Munster lurking there somewhere and a chance to channel momentum towards the Heineken Cup.

“When I first came in, the majority of the Irish team was Munster based,” he says. “Talking to Leinster players at the time, they often used it as motivation. That boiled over into the period where they won those Heineken Cups.

“Taking that sort of logic, the roles are reversed a little where a lot of Munster guys want to play for the Irish team . . . and that’s what makes it a crucial game.”