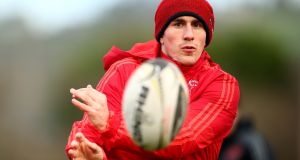 Ian Keatley: gets a chance to reaffirm his role as the starting outhalf for Munster. Photograph: James Crombie/Inpho

There are so many elements of Munster’s game that need improving but more than anything the home-grown players need to start performing for Anthony Foley.

Because the others are delivering. CJ Stander has shown himself a competent enough leader who continually heaps responsibility on his own broad shoulders. Francis Saili is a quality signing, constantly probing the oppositions defensive line even with sloppy ball. BJ Botha continues to perform like the Springbok he once was despite being 35.

Even Andrew Conway is looking a dangerous and certainly a brave fullback replacement since Felix Jones’ enforced retirement. But of course Conway came from Dublin.

Mark Chisholm still has a bit of convincing to do even if the quality of the Australian lock has been in evidence. Those Munster have nurtured from teenagers need to stand up or this will be an unprecedented, disastrous season.

Jack O’Donoghue is another Academy product developing into a permanent fixture in Foley’s starting XV.

The concern is whether they are as good as they are needed to be so soon.

The main problem is players like Dave Foley and Tomás O’Leary are way below the expected Munster standard. O’Leary’s passing and general decision making slowed all their attacks last weekend while Foley has been out muscled in important collisions.

Inspiration should come from Dave Kilcoyne, in for the crocked James Cronin, while Tommy O’Donnell’s return to the seven jersey is not a moment too soon.

“I’m very wary of what they are going to bring,” said Les Kiss of a Munster team who are staring down the barrel of a record sixth straight defeat.

The wonder is what exactly Kiss should be wary about. Maybe their disgust with recent handling errors in sight of the opposing try line will provide stubborn motivation.

“A big issue at the moment for us is our inability to score,” said Foley. “We need to try and make life a little bit easier for ourselves and try and get that scoreboard ticking over.

“Tyler [Bleyendaal] missed a penalty against Dragons, Keats [Ian Keatley] missed one against Leicester, and Rory [Scannell] missed one against Leinster. There is no hiding away from the fact that we need to be getting those three points. That builds the scoreboard up. But they step up and miss them and we have got to then get back into the game somehow.”

Keatley gets a chance to reaffirm his role as the starting outhalf. It starts off the tee. And in defence.

If Munster bring some consistency to those two areas they will start winning again. Without such basics they are simply not a good side.

Ulster are moving rapidly in the other direction under Kiss. Just three points separate them in the Pro 12 table – lying fourth and seventh – but beating Toulouse home then away has lifted confidence levels to a different plateau.

Ruan Pienaar is operating like the prince of scrumhalves that he is which allows Paddy Jackson’s playmaking to grow and grow. Luke Marshall and Stuart McCloskey are showing well in midfield while Andrew Trimble seems certain to reclaim the 14 jersey come Six Nations. The pack seem so angered by the Saracens bullying in November that they have refused to bend since.

Ulster to win before three European matches in a row follow for both provinces.