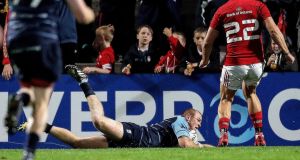 Munster fell to their first loss of the Pro 12 season as tries from Andrew Conway and Dave Kilcoyne could not deny Cardiff the win at Musgrave Park.

Two tries from Tom James in the first half and another late on from Dan Fish gave the Welsh side their second win of the campaign, as injuries to Rory Scannell, Tommy O’Donnell and Dave Foley further marred Munster’s loss.

Unlike last week, Munster had started the game well, with Darren Sweetnam in particular defending smartly wide on the touchline. But from the early stages the tactic from the home side were pretty clear as they sought to kick more often than not.

On the other hand Cardiff mostly opted to keep the ball alive and offload in the tackle, and this approach brought their first try after eight minutes when Fish sent James over for a 7-0 lead.

It didn’t take Munster long to level matters and the score originated from the boot of Ian Keatley, who chipped well in behind the rushing Cardiff defence wide on the right. Sweetnam looked like he was chasing a lost cause, but toe-poked a kick through that he gathered, before he offload superbly to Conway on his shoulder for the try.

After the kickers swapped penalties, Cardiff continued to pick holes in Munster’s defence, and after Ellis Jenkins had a try ruled out, they took the lead at the break after a scything first-phase lineout move in the 36th minute that sent James in for his second.

The Blues were good value for their 17-10 lead at the interval, and despite the loss of Rory Scannell at half-time and O’Donnell shortly after the restart, the home side showed great intent and carried the ball through multiple phases early on, but they were twice punished for sloppiness as the line approached.

The arrival of CJ Stander for his seasonal bow was matched by the introduction of Lions captain Sam Warburton for the Blues, and Munster were soon forced into another early change when the injured Foley was replaced by Donnacha Ryan.

And with their pack bolstered, a huge Munster shove forced a penalty from a Cardiff scrum, which Keatley kicked to cut the gap to four points.

There was no doubt that Munster were the side with all the momentum at this stage and when Keatley kicked a penalty into the corner, they looked certain to score from a rolling maul. They were stopped just short, but showed remarkable patience as they edged their way across field through the phases, before Kilcoyne burrowed over from a few inches to give his side the lead for the first time.

But nine minutes from time the home side were made severely punished when they kicked ball away to Lloyd Williams, and the Cardiff scrumhalf sent Ray Lee-Lo down the left before Fish ran in the lead try.

Keatley’s penalty gave Munster some hope, but they could not gain the territory needed to force a winner.