Connacht sank at the death by Scarlets after late indisicpline 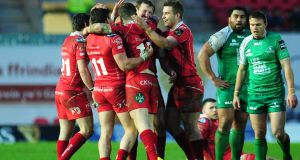 Connacht head coach Pat Lam reckons his side shot themselves in the foot after Steve Shingler’s dead-eye penalty at the last wounded their chances of a Pro12 playoff spot.

Jack Carty’s penalty three minutes from time looked to have snatched a first win at Parc Y Scarlets after Matt Healy’s length of the field try had put the Galway side in pole position.

But an illegal clear-out from Porter with 20 seconds left allowed the Scarlets replacement to snatch a 21-19 triumph and top-spot in the league.

“There is a lot of frustration after that, we haven’t won down here and that was a huge blow for the boys, who consistently put effort in,” said Lam.

“To get ahead with three minutes to go and throw it away at the end is gutting for everyone.”

It looked like it was going to be a long afternoon for the Galway side when Bundee Aki barged into Regan King off the ball to earn himself a yellow card.

The 14-men of Connacht should have been ahead after 17 minutes, but a harsh decision from a combination of referee Marius Mitrea and television match official Paul Adams denied Pat Lam’s side.

John Muldoon was stopped just short, before the ball spilled out of the ruck into the in-goal area. Wales prop Rob Evans failed to take action, and Eoghan Masterson stole in to touch down, but he was adjudged not to have got enough downward pressure on the ball.

But 10 points in five minutes gave the visitors a huge chance to claim their first win at Parc Y Scarlets.

King was shown yellow for slowing the ball at a ruck, and Craig Ronaldson fired Connacht ahead with a penalty, before Ireland hopeful Healy gave Joe Schmidt a nudge.

A knock-on from prop Evans presented the ball to Aki, who drew in Steff Evans and fed Healy, who raced home from 80 metres.

Ronaldson converted before Aled Thomas pulled a penalty back for the Scarlets, but Connacht went in with a seven point lead.

The West Wales high-fliers returned from changing rooms with renewed vigour, and snatched the lead within six second-half minutes.

Thomas landed a second penalty, before full-back Michael Collins chased his own clearing kick and charged down the return to set the hosts on the attack.

Parkes burrowed down the middle before the ball was swung wide for wing Evans to slide in at the corner.

Ronaldson levelled with a penalty before the Scarlets landed a hefty blow through full-back Collins. Regan King burst through a gap in the defence, and Collins was on his shoulder to finish.

But Connacht’s fight for a playoff place received a major boost with three minutes go when Mitrea caught the Scarlets offside on their own 10 metre line.

Carty stepped up and slotted the penalty to give Lam’s men a 19-18 advantage but it was snatched away from them at the death.

Porter tipped Aaron Shingler onto his neck at a ruck, and his brother Steven slotted the penalty for a 21-19 triumph.