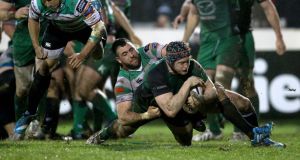 Kieran Marmion marked his 50th provincial cap with a try as Connacht ran out comfortable bonus-point winners over Benetton Treviso at the Sportsground.

Scrumhalf Marmion’s fifth try of the Pro12 campaign came in a Connacht-dominated first half which ended 24-6 in their favour.

Fionn Carr and John Muldoon also touched down before the break, and in a rain-lashed second period captain Muldoon scored once more from a successful lineout maul and returning number eight Eoin McKeon added a fifth try late on in a 38-6 triumph.

It was Connacht’s third straight league win and a second successive bonus-point victory — a tremendous turnaround after the deflation of January’s Heineken Cup hammering by Saracens.

The western province entered this block of four league games at the bottom of the table, but they have now leapfrogged Zebre, Treviso and latterly Cardiff Blues to sit ninth overall.

Beaten 23-3 by Treviso back in October, Pat Lam’s men hit the front after five minutes in Galway when Carr ran in a converted effort after good work by Robbie Henshaw and Eoin Griffin.

Mat Berquist responded with a penalty but Connacht pressed home their early advantage, a well-orchestrated maul giving Muldoon the opportunity to crash over for a second seven-pointer.

Connacht’s discipline slipped again in allowing Berquist to make it 14-6, but Parks — whose control of proceedings earned him the man-of-the-match honour — soon cancelled out those three points.

Ireland hopeful Marmion grabbed a try against Zebre last Sunday and he repeated the trick by dummying his way through a gap to score, with Treviso’s calls for obstruction dismissed by referee Leighton Hodges.

Parks’ successful conversion put 18 points between the sides, but one area that was letting Connacht down was their usually reliable scrum.

The Italian set-piece powered through to force a late penalty but Berquist’s kick was off target.

The heavy wind and rain disrupted both sides on the resumption, a crooked lineout throw spoiling a good opportunity for Connacht and a Treviso scrum was pushed backwards just when the visitors looked set to pounce for a try.

The worsening conditions meant Connacht had to show patience in their pursuit of try number four, with a Carr run and a lineout steal by Andrew Browne getting them back into scoring range.

Parks kicked a scrum penalty to the corner and Muldoon was driven over from a 63rd-minute lineout maul to register the bonus point. Parks’ conversion widened the margin to 25 points.

The Italian side’s woes were compounded by yellow cards for replacement prop Ignacio Fernandez-Rouyet (69 minutes) and number eight Marco Filippucci (70), the former seeing yellow for a high tackle on Marmion.

McKeon then marked his return from injury by breaking off a close-in scrum for a final try which Parks’ replacement Miah Nikora converted.