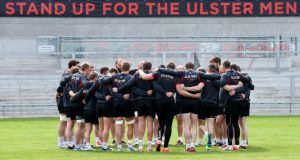 Ulster Rugby squad training at Kingspan Stadium, Belfast, ahead of their Pro12 semi-final against Glasgow at Scotstoun. Photograph: Brian Little/Inpho.

What makes Ulster a lesser proposition than last season or when they reached the 2012 European Cup final is the reduction of power forwards. Johann Muller (retired), John Afoa (departed) and Nick Williams (suspended) is some bulky mass to replace.

The flip side to this argument is the rise of their own young talent like Iain Henderson and Paddy Jackson. Will it be enough? Glasgow look ready to make the next leap and capture some silverware.

Neil Doak took a clever risk last weekend by benching practically every key starter besides Chris Henry, who needed the game time. Except Van der Merwe, who started and got injured but that gave the team the jolt of Henderson’s early arrival.

The 23-year-old is increasingly looking like the one who can fill the void soon to be left by Paul O’Connell. In the meantime, come the World Cup, he might usurp Peter O’Mahony or Devin Toner or remain as the ultimate impact forward. It’s blindside for him tonight where he must match Josh Strauss – Glasgow’s most ferocious backrower.

The changes Townsend made this week are subtle but important with Henry Pyrgos returning to scrumhalf as the evasive Niko Matawalu shifts to left wing with Sean Lamount benched. Fraser Brown returns at hooker instead of Dougie Hall. Ulster, with just three of this pack, mauled Glasgow backwards for Henry’s try last Saturday. They should go back to that tactic again.

“We had a few knocks and bumps where guys couldn’t play two games in a row,” says Rory Best, “so we probably didn’t give a lot away but they are probably feeling the same.”

Ten minutes into that second half Glasgow fractured the Ulster defence on the outside through Stuart Hogg and inside via Finn Russell. It’s hard to see Hogg tearing away from Craig Gilroy in similar fashion or Russell slipping two defenders, bumping Paul Marshall and stepping Robbie Diack simply because different Ulster defenders will be in place. Or Richie Vernon being allowed stroll through their midfield as he did for the last try.

Ulster will tighten up. Higher all round standards allied by Jackson continuing his upward trajectory now he’s injury free and taking more responsibility, like the place kicking. He wasn’t ready in 2012.

“We know if we need a combination of all the good points in those games mixed in with a bit of luck.”

They need dominant performances from Henry, Best and Tommy Bowe. Same goes for Jared Payne and Darren Cave in the newly made midfield. It’s possible that Ulster can salvage this season. They just need to produce their best performance of it to date. It will be close.