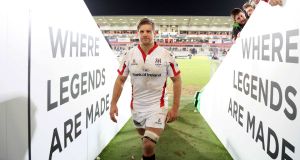 Ulster’s Chris Henry has played in just one game in the past six weeks after injuring his shoulder against Toulouse in December. Photograph: Darren Kidd/Inpho/Presseye

It’s not just youth that suffers from impetuosity. Chris Henry sustained a shoulder injury that he initially thought relatively innocuous, before playing two more matches and discovering that it was more debilitating than he first realised.

The upshot was that he has played in just a single game, last weekend’s victory over the Glasgow Warriors, in the past six weeks or so. On Sunday he’ll hope to make that two when Ulster take on the Scarlets in Belfast and then, potentially another, the following weekend against the Cardiff Blues.

Thoughts of contributing to Ireland’s cause in the Six Nations Championship are peripheral to his immediate focus. The 31-year-old openside flanker played in all five of Ireland’s matches in the Rugby World Cup but the shoulder damage suffered in the 38-0 Champions Cup victory over Toulouse in December scuppered the ambition of adding to his 24 caps (four tries) in the short term.

He hasn’t had much luck in recent seasons in relation to the Six Nations, as he explained: “The last few Six Nations campaigns have been disappointing. Last year I was out, two years ago I was in the squad but was [ruled] out with a hamstring tear. It just shows that the timing of injury is crucial.

“For me, the Irish stuff is secondary. I do feel that the process has worked for me in the past in concentrating on just getting back for Ulster and getting as much game time as possible. I am not battle hardened [through lack of current game time] and in my position you need to be in the mix and have those bumps and bruises.

“When you are out of the game it takes time to get back up to speed [in terms of the collisions]. Obviously Sean Reidy has been playing very well so for me it is not about looking at Ireland but just trying to get back in an Ulster jersey, to put in a performance that gets me back in the seven shirt.

“I would love to think that Joe [Schmidt] will watch the [Ulster] game but I feel that I need a run of rugby. You can’t just throw yourself back in, well Paul O’Connell could, but with most players you need a run of game time to get battle hardened.”

The Ireland coach is a fan of Henry’s, dating back to when Schmidt coached Leinster and found the Ulster flanker something of an immovable object when it came to the breakdown in matches between the teams. That respect has endured to the national side.

One player’s misfortune is another’s opportunity, Henry acknowledged. “Tommy O’Donnell hasn’t let Joe down, Rhys Ruddock hasn’t let Joe down; Joe rewards people whom he trusts. I hope that he knows I have done the job for him in the past, that I’m still here, but it’s just so far off.”

He’d relish the prospect of being invited down to Irish training to help out in whatever capacity but he’s realistic enough to appreciate that there are others ahead of him in the pecking order, even allowing for an injury to Seán O’Brien.

“If the timing is too short for the Six Nations, then I am very determined to make the South Africa tour. If that is too short then it is very much a case of focusing on the November series. There are always targets in the back of your mind that you want to strive for.

“I feel like I am at an age where I am hitting my peak. Physically I’m in good shape. I am at an age now where I know the game better than I did four or five years ago. As an openside I feel confident that there is a lot more to come from me. It would be great to get back out and involved with Ireland at some stage.”

For now, however, it’s Ulster that concerns him. The recent signing of 24-year-old Springbok Marcell Coetzee, to complement the arrival of Charles Piutau and Rodney Ah You in the summer, and the emergence of several academy prospects suggests that Ulster will present a formidable prospect for all-comers next season.

It’s not, though, that Henry has given up on winning some silverware in the present campaign. Perched atop the Pro12 table he knows the next few weeks will have a big bearing in terms of jostling for playoff places.

“In the Six Nations [timeframe]last year we picked up a healthy amount of points and that is something we focused on again this time. The pressure is on to keep on racking up points. It reminds me of other seasons where we have been successful in getting to semi-finals and finals.

“Are we playing to our best? Probably not, but we are still winning. I think as soon as that clicks and we start finishing off the chances, we could be really dangerous. A lot of teams are saying the same thing. I don’t think there has been a stand-out team dominating this league and the competitiveness at the top shows that.”

1 Worst sporting moment: White knuckle ride on a hate-filled night at Windsor
2 Shane Lowry right in the mix at Wyndham after brilliant 63
3 Bundini Brown: The man who invented ‘float like a butterfly, sting like a bee’
4 Canned clapping at the Crucible? It’s weirder it’s getting
5 Acute disillusionment the only response to growing FAI debacle
Real news has value SUBSCRIBE