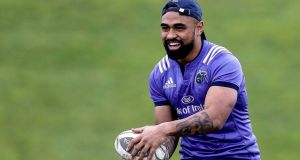 Francis Saili is set to make his first start of the season for Munster against Connacht on Saturday night. Photograph: Inpho/Tommy Dickson

Francis Saili will make his first Munster start of the season as his side take on Pro 12 champions Connacht at the Sportsground on New Year’s Eve.

Saili’s inclusion is one of 11 changes made by Rassie Erasmus to the XV which beat Leinster on Stephen’s Day.

Connacht boss Pat Lam however has only been able to bring in four new faces after defeat to Ulster on December 23rd, which his squad still ravaged by injuries.

Tom McCartney has been recalled for Saturday evening’s fixture in Galway and will captain the side in the absence of John Muldoon. Naulia Dawi makes his first start for the province at number eight with Jake Heenan also coming into the backrow.

There is a solitary change in the backline with Peter Robb returning to start in midfield alongside Rory Parata.

For the visitors Keith Earls returns on the wing, while Dan Goggin joins Saili at centre. Ian Keatley takes the number 10 jersey with Duncan Williams at scrumhalf.

Billy Holland and Jack O’Donoghue come in to join Tommy O’Donnell in the backrow, with Holland captaining the side in the absence of Peter O’Mahony.

Champions Connacht have had a torrid time with injuries, and coach Lam reflected on the selection challanges he has faced: “With over half of our senior squad unavailable through injury and more players going down this week either with injury or sickness, it’s been another incredibly challenging week.

“We know it’s going to be very tough against Munster but despite the setbacks we have confidence in the players left standing. Being back at home in a sold out Sportsground for the last game of 2016 also helps the situation we are in.

“We have a lot of respect for top-of-the-table side Munster and what they are achieving this season. They are without a doubt the form team of the PRO12 championship. It’s going to take a massive team effort against them tomorrow but we’re looking forward to the significant challenge in front of us.”