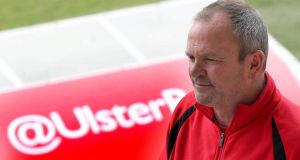 IRFU chief executive Philip Browne says there is not a problem in Ulster rugby. With interim coach Les Kiss soon to leave to rejoin Joe Schmidt in the Irish camp, Browne is confident that David Nucifora, the IRFU’s High Performance Director along with Ulster Chief executive Shane Logan will chose the right coach to compliment the current structures.

Browne did not rule out the current assistant coaches Neil Doak and Allen Clarke from guiding Ulster when Kiss shortly departs to the Irish team base in Kildare.

“There are good coaches in Ulster, who have been there all along in terms of Allen Clarke and Neil Doak” said Browne, speaking after this years IRFU AGM. “The timing has not been ideal but this part of the season I think we’ll be fine in Ulster. This time of year is probably not ideal but having said that your windows of opportunity open at different times of the year.

“In the southern hemisphere their season effectively ends come September, October so there are opportunities that arise at certain times of the year when coaches become available.

Browne added that the role of Kiss was always a short term role and that there was never any plan other than staying until he was required to return to Schmidt and the Irish set up.

“The primary role of Les come the end of September is with the national team. That’s where he will be returning to,” added Browne. “The national team has a pretty intense programme over the next 18 months so that will be the focus.”

Kiss, who had been appointed as the interim coach following the abrupt departure of coach Mark Anscombe and Director of Rugby David Humphreys has been with the province since before the season began.

“What will probably happen is David (Nucifora) along with Shane Logan will look at the options and try to identify and recruit the right sort of person. At the end of the day David Humphreys had an opportunity and he took it. That was a surprise to everyone including, I think, David Humphreys so everything stems from that. I don’t think there is any inherent problem in Ulster. They are a good team with a good accademy and structures and fantastic facilities - as good as I’ve seen.”

1 Gordon D’Arcy: Losing such a big game shines a very harsh light on certain players
2 How Dundalk’s opponents Sheriff started on wrong side of the law
3 The Offload: Saracens prove Pro14 is not fit for purpose
4 Five French rugby officials released after over 24 hours of questioning
5 Meet Liverpool’s throw-in coach who aims to ‘change football’
Real news has value SUBSCRIBE