Daniel Dass, Brian du Toit and Jonathan Dixon all to line out at Twickenham 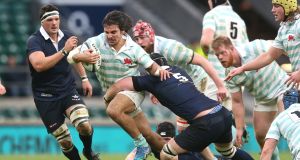 Three Irish players, and another, Conor Kearns who was educated in Ireland, will be involved in Thursday’s Varsity match between Oxford and Cambridge at Twickenham.

Cambridge are captained by 21-year-old former Belfast Royal Academy pupil Daniel Dass, winning his third blue. The number eight has previously played for the Ulster Under-19 side. He will be joined in the backrow by ex King’s Hospital and Dublin University flanker Brian du Toit (23), who was Trinity’s player of the year in 2014 and 2015.

He represented Leinster at U-19 and A levels and it is his debut in the Varsity match as it is for the third Irish member of the Cambridge team, tighthead prop Jonathan Dixon (24), who played with Ulster and U-18 and U-20 levels and is a former pupil of Royal School Armagh.

Oxford are going for a seventh successive win in the fixture and included on their bench is Kearns, who attended Glenstal Abbey and is an underage USA international.

Meanwhile Ulster lock Dan Tuohy will play under Pat Lam next season after it was announced he has joined Bristol with immediate effect.

The 31-year-old joined Ulster from Exeter in 2009, and will return to his native West Country after making 136 appearances for the province. Tuohy made his debut for Ireland against New Zealand in 2010, and went on to represent his country on 11 occasions.

On Tuohy’s departure, Ulster director of rugby Les Kiss said: “When Bristol made the approach, it was only fair that we considered it and the outcome is very suitable for all parties.

“We are pretty well stocked in the second row with Franco van der Merwe, Iain Henderson, Alan O’Connor, Pete Browne, Robbie Diack and Kieran Treadwell all providing good options for us. We also have young up and coming locks John Donnan and Alex Thompson in our rugby programme.

“We would like to thank Dan for his contribution to Ulster Rugby and wish him well as he embarks on a new challenge with Bristol.”

Tuohy said: “I have a huge hole to fill on Friday nights now but I can’t wait for the new challenges that Bristol presents. I was born in Bristol and raised just down the road, which adds to my excitement of going there.”

Tuohy’s move to Bristol follows the news on Monday Connacht coach Lam is to take over the Premiership’s basement club in the summer.