With Ireland facing two massive clashes against Wales and England in rounds four and five of the Six Nations, John O'Sullivan looks at the Irish fixtures and how they may impact on Ireland's title hopes. Video: David Dunne 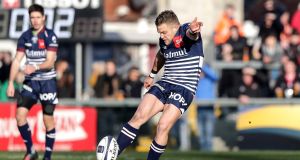 The decision to call up Ian Keatley to act as cover at outhalf along with his Munster team-mate Rory Scannell in light of Johnny Sexton’s withdrawal, and overlook the French-based Ian Madigan, constitutes something of a benchmark.

Henceforth, clearly, the Irish management will only turn to overseas-based players in exceptional circumstances, and maybe not even then. In a sense, perhaps, it has always been thus. Since the retirement of Geordan Murphy, the only exception thus far has been Sexton himself during his two-year sojourn with Racing.

That’s fair enough, given his importance to the Ireland team, and Sexton also made a contractual point of making himself available to Irish training weeks outside of Test windows. No point cutting off your nose to spite your face.

And although he always remained the de facto Irish outhalf, his difficult time in Paris before making a prodigal return home turned into an effective warning that the grass is not always greener abroad, without the IRFU ever having to say as much.

The union assuredly also learned from that saga, completing their negotiations more swiftly since then. Had Jamie Heaslip or Seán O’Brien moved abroad when opportunities arose, perhaps exceptions would have been made for them also.

In any event, Sexton apart, this principled policy is designed to encourage players to remain within the provincial fold, and to reward those who decide to do so; the rewards not only being better game management but selection ahead of foreign-based players. It is a policy readily endorsed by both the IRFU and its high performance manager David Nucifora, as well as Joe Schmidt.

In the case of the Wasps’ based Marty Moore, who was an ever-present off the bench as back-up to Mike Ross in the 2014 and 2015 championship wins, this is no longer as risky as it once might have seemed given the emergence of Tadhg Furlong, Finlay Bealham and now John Ryan.

However, despite Paddy Jackson’s upward graph and accumulation of three starts on the tour to South Africa, it is an altogether more calculated gamble at outhalf to entrust Scannell and Keatley as back-up over Madigan.

Schmidt places great store by the players being available for all training camps, and yesterday Simon Easterby cited Madigan’s absence from Carton House last week due to his commitments with Bordeaux-Begles as a factor in this policy.

Then again, Keatley wasn’t there last week either, and over the last four seasons Madigan has accumulated way more experience as both a stand-in starter and replacement at outhalf, winning 30 caps to Keatley’s four.

Of those 30 caps, Madigan’s six starts have been at outhalf, where he has a five-one win-loss record, and of his 24 appearances off the bench, 17 of them have been at outhalf. In these, he has an 11-1-5 win-draw-loss record, often steering the ship home in games such as the two-Test series win in Argentina and the World Cup pool decider against France.

By contrast, Keatley has made three starts at 10, the last of them being the Six Nations opener in Rome two years ago, while his sole appearance off the bench was at inside centre against Georgia in November 2014. Scannell, meanwhile, is uncapped.

Even this season Keatley has only started six games for Munster, where he is back-up to Tyler Bleyendaal, and of those five have been at outhalf, and all in the Pro12. Of his four appearances off the bench in the European Champions Cup, only one has been at outhalf, the others coming at inside centre and fullback.

For all his versatility, Scannell’s 14 games this season for Munster, including playing every minute in the European Cup, have been at inside centre. Admittedly, he did switch to outhalf for the endgame of their league win away to Ulster in December, when augmenting his earlier try and conversion with the match-winning drop goal.

Again by way of contrast,  Madigan has played 15 games for Bordeaux-Begles this season, and, fulfilling his desire to play at his preferred outhalf position, all his 11 starts have been at outhalf, along with all but one of his four appearances off the bench.

In other respects though, the move has not worked out quite as Madigan would have hoped, at least not yet. He clearly began the season as their first-choice outhalf ahead of Lionel Beauxis, starting six of Bordeaux’s first 11 games, before injury sidelined him for four weeks.

Madigan hasn’t started at outhalf in the Top14 since the last of those away to Castres in late October, his three starts since then all coming in the Champions Cup, as he and Beauxis have effectively been replaced as first-choice 10 by the Kiwi Simon Hickey.

His goal-kicking, 125 points so far, has been good, as has his attitude. But when he was replaced just past the hour in the 9-6 European Cup defeat at home by Clermont by Yann Lesgourges, head coach Raphael Ibanez was asked if he was disappointed with Madigan’s performance. “Well, if I take off my outhalf after 60 minutes that is your answer,” he said.

Had Madigan been cutting a swathe with Bordeaux, maybe yesterday might have panned out differently, but one doubts it. And all this to the backdrop of JJ Hanrahan coming home to Munster next season after being out of sight for two seasons in Northampton.

It’s a calculated gamble, beginning in Murrayfield on Saturday, but the message is clear.