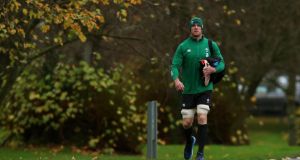 Paul O’Connell has changed. Perfection, he has come to realise, is not possible.

The day before game day is of little benefit to anyone. It’s a case of trying to gauge the mood. Guess work. Now, the lessons to be learnt from November 2013 might be of some value.

Last season Ireland trained perfectly before the Wallabies, who had been on the lash in Dublin, tore them asunder. Professionalism and logic proved of little benefit to anyone.

“It’s a similar time of year to when we played Australia last year.You come in and you work under Joe for two weeks. It’s very different to anything else we work at in our provinces.

“(Against Australia) we knew exactly what we wanted to do when we went out on the pitch but we didn’t have the correct mental attitude to execute it. If we don’t have that tomorrow against South Africa it will be a very tough day.

“Obviously they have a very good backline that they have been using more of this season but they base so much of what they do on physicality and intensity. We need to match that, we need to find that in our first game having not played since June. That’s the big thing for us; being able to hit the ground running, being able to start as if we’ve played six, seven games in a row together. There has been a lot of chat about that in the last two weeks. To prevent that from happening.

It was suggested that Ireland, in their current state, need a perfect day tomorrow.

Particularly now against a team like South Africa, the way they have been playing off loose ball. We’ve seen clip after clip of them attacking deep from their own half where they turned over ball.

“That’s another thing we have discussed. You have to react to everything. There will be mistakes from them and us. How you react to them is a big part to how you perform on the day.”

“No Gert Smal to help me. Simon doesn’t speak Afrikaans.”

Simon Easterby sat alongside the Ireland captain. Inevitably the conditioning of Mike Ross was put to the forwards coach.

“(Mike) has trained very well this week and we are confident he will get through a large part of the game.”

“South Africa have pretty much blitzed New Zealand,” O’Connell added. “They are playing some really good rugby. It is a massive challenge for us. For the likes of Jack McGrath and Sean Cronin, guys who are picked in the absence of Rory Best and Cian Healy, it is a brilliant opportunity.

Remember his expression at full time of the Lions second test at Loftus Versfeld. That hurt can be mined for as long as he is still playing. Perfection is something he’s still striving for.

1 Six Nations: Ireland are contenders but England still the team to beat
2 In Donegal Michael Murphy is seen, simply, as a godsend
3 Owen Doyle: Creeping professionalism of schools rugby a threat to the game
4 Mike Catt hopes to have Irish backs purring in Six Nations
5 Gary Neville in Qatar an exercise in semi-journalism
Real news has value SUBSCRIBE