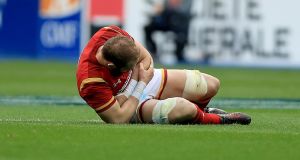 Alun Wyn Jones of Wales goes down injured during their Six Nations clash with France on Saturday. Photo: Donall Farmer/Inpho

Alun Wyn Jones potential Lions tour has been put in jeopardy by the news that he will undergo a six week period of rehabilitation after suffering a shoulder injury in Wales clash with France last Saturday.

Warren Gatland will announce his squad for the tour of New Zealand on April 19th with Wyn Jones set to be out of action until at least May 2nd. The Welsh captain was widely tipped to captain the tourists on the trip down under.

The Lions first warmup match takes place on June 3rd with the first test against the All Blacks on July 1st.

The lock picked up a knock during Wales’ enthralling defeat to France in Paris on Saturday and had to be substituted early in the second half.

He will now miss Ospreys next four Pro12 matches – including meetings with Ulster and Leinster – as well as their Challenge Cup clash with Stade Francais on April 2nd.

If the recovery process goes as planned he will be available for selection for the Welsh derby againsy Scarlets on May 6th at the earliest.