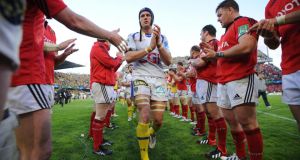 Julien Bonnaire being applauded off by Munster. Bonnaire got his team-mates to abandon their lap of honour and walk over to their vanquished foes. Photograph: afp/getty images

There was a lovely moment soon after the post-match exchange of hands as Clermont embarked on their lap of honour which, after 80 minutes of beating the living lard out of each other and, as ever, not always strictly by the laws, summed up the sense of mutual respect of this immense sporting occasion.

Julien Bonnaire looked over his left shoulder to the tunnels from the dressingrooms and noticed that the Munster squad had formed two lines to applaud the winners off the pitch. Not wanting to keep them waiting, he implored his team-mates to abandon their lap of honour and instead walk over to their vanquished foes.

Whereupon, Paul O’Connell, led his team-mates over to the thank their fans mostly assembled in the half of the ground they had bravely defended in the first half and attacked in the second, before leaving Clermont to their lap of honour. Class all round.

“For Clermont and for me personally it will be the first time ever in the H Cup final so it really means a lot to us,” said Bonnaire, describing it as one of the greatest days of his career. “It means a lot of hard work has paid off. We’ve had some testing experiences in the past. It’s a credit to all the team and the players who have been here. But it’s not enough to get to a final. You need to play a final to win it and that is the toughest task and that is still ahead of us.”

Standing close
Within seconds of the full-time whistle and standing in close proximity as they had been throughout the 80 minutes and so many times before, were O’Connell and Nathan Hines; and their exchange was notably prolonged.

“I’ve no problems with him,” said the ex Leinster man. “I said to him I thought he did a great job coming back from injury and that he did very well. He has come back and I know how hard it can be to have a long injury and to come back and to play after injury, especially at a high level and the level he expects himself to play. He backed himself to play and he produced. I think Munster were enjoying all that pantomime villain stuff.”

Hines echoed the view of Morgan Parra that they probably wouldn’t have completed the win without their supporters. “When they play at home they make a big noise. Our ground is 18,000 and it is always full, a bit of a riot. They also make a big racket. Here they came out in force, and really got behind us. Even when we came to the warm-up they were cheering and probably louder than in some games. Fair dues to Munster as well and those who travelled down, you could hear them especially in the second-half when they were on a bit of a roll.”