Munster to sell the naming rights for Thomond Park 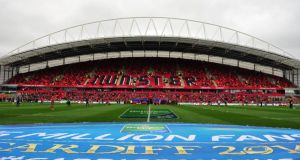 
Munster are looking to sell the naming rights to Thomond Park in an effort to keep pace with the big-spending French and English clubs.

The disparity is apparent in Sunday’s Heineken Cup semi-final in Marseille where Munster will be expected to deliver despite having about 20 per cent of the budget which is at Toulon’s disposal.

The Côte d’Azur club, headed up by comic book magnate Mourad Boudjellal, have an annual budget of around €24 million and even at that are not the biggest spenders in France with Toulouse leading the way, followed by Clermont Auvergne.

Munster CEO Garrett Fitzgerald confirmed that they are working on a new financial model and that the naming rights to the famed Limerick venue is on the agenda.

That came about following the creation of an advisory commercial board set up almost two years ago which is headed up by Niall FitzGerald KBE. A native of Limerick, he was formerly chairman and chief executive of Unilever, chairman of Reuters and is now the chairman of the British Museum.

“We constantly assess our governance, see where we are going and what we need to change,” said Garret Fitzgerald. “We have seen the way other entities have developed. We need to keep pace with them on a commercial front to ensure we remain competitive on the field at the top level.

“The environment has changed enormously here, there is less money in circulation and there is more competition for funding and sponsorship,” said the Munster CEO.

“The commercial board are constantly looking at options and the naming rights to Thomond Park is one of them. “But the package has to be right . . . The right partner has to be found.