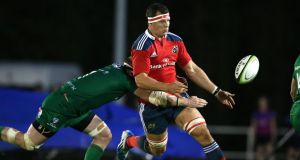 Munster’s Robin Copeland believes it “takes a while to settle into a new club. It is new moves, new players, new everything.” Photograph: Billy Stickland/Inpho

As ever with these little Leinster-Munster encounters, there are a host of intriguing sub-plots and not least of these will be Robin Copeland coming up against his native province and going head-to-head with Jamie Heaslip.

As James Coughlan, Roger Wilson and others can testify, the indefatigable 30-year-old Heaslip has been blocking the path of any would-be Irish number eight for seven seasons or so. And at 26 the Wexford-born Copeland has even had to take a circuitous route to this belated first rendezvous.

By his own admission, Copeland wasn’t mentally ready for the Leinster set-up when not even lasting beyond a year in their sub academy after leaving Kilkenny College. Instead, he was rejuvenated by a prolific season with St Mary’s and one-year spells with Plymouth Albion and Rotherham Titans in the English Championship before two seasons with Cardiff Blues.

The decision to join Munster was, he admitted, with big occasions and showcase games like these in mind. “Yeah, I suppose. In a way there were lots of reasons I came home and why I joined here, but the main reason I came home was to try and win trophies and try and work my way into the starting team and eventually into a green jersey. They are the big goals. There are little goals along the way. Playing well in these big games is a big part of that . . . there is a responsibility and expectation to perform. Yeah, for these big games, you have to bring your A game.”

Aside from being a natural footballer and athlete, Copeland has an engaging, smiling manner about him and a refreshing candidness which you hope he keeps. So it was, for example, that he dismissed any notion that these days are the reward for the years of roughing it, by comparison, in the English championship.

“No. It’s not yet. I think it’s a stepping stone. Can you really live the dream and be at the top? I’m a long way off where I want to be. I’m not here to just make up a number in Irish rugby. I want to be up there and playing the best rugby at the best level. When I get there maybe I’ll say I’ll be living the dream but not quite yet.”

Copeland was not of a mind to personalise the number eight duel, and rubbishes criticism of Heaslip, whom he describes as “world-class” for his combination of attack and defensive work, although their paths did not cross during his Cardiff years. “I haven’t played against him a whole lot. I’m trying not to think about him, or them too much in specifics. It is just a structure and what they are going to bring, what I’m going to do to try and counteract that.”

There were times last season, notably in the Blues’ heavy defeat away to Toulon, when Copeland was almost a one-man resistance force. But by his own admission he has not kicked on from his Wolfhounds debut against the Saxons and then his player-of-the-tournament exploits in the IRB Nations Cup with Emerging Ireland last summer.

“I don’t think my performances in the past few weeks have been fantastic, just maybe because I feel that it does take a while to settle into a new club. It is new moves, new players, new everything. They don’t know what I can do. I don’t know what they are going to do as such. It is a different structure, a different culture. It does take a while.”

“I am not putting myself under any pressure to get those man of the match performances straight away. I just want to do my roles right, do what is best for the team, get in right positions, defend well and do what I have to before I can do the spectacular, if you know what I mean. I am a little bit off maybe where I should be or was, but is it a big thing? No. Is it a worry? No.”

By the same token, he remains convinced Munster are only “two or three per cent away” from clicking, that they have the players, structure and the game plan, but likening last Saturday’s dressing

room to a morgue, Copeland also admits Munster need to start clicking sooner rather than later.

He was reluctant to draw comparisons with the Blues for fear of offending ex-Cardiff team-mates, as has happened in the past, but acknowledged Munster was a very different set-up, specifically with regard to expectations. Whereas Cardiff targeted a top-six league finish and a European quarter-final, Munster aimed to win the league and to a Euro semi-final and beyond.

“It’s not arrogant, it’s an expectation. It’s where this club historically has been and where it needs to be. We can’t let games slip by like the weekend, especially at home.”

That said, Copeland notes with some fun how he has missed out on the defeats to Edinburgh and the Ospreys, leaving him with a played two, won two record so far.

“I’ve a 100 per cent record which I’d like to maintain,” he said, adding with a laugh after being asked whether he will following Saturday’s game, “I’m not a fortune teller but I bloody hope so.

“Big game, big stadium, big crowd, lot of pressure, why not? Why can’t we go and do it. There is no reason why we can’t.”

Neither will there be the remotest hint of mixed emotions about facing his native province.

“No, obviously not. It is a pretty clear task we have. Yes, it is a new club for me, but this is my club now.

“I am trying to immerse myself in the culture, and what is expected of me and the team. So, I think emotions are pretty clear as to what we need to do.”