Munster have work to do despite win, says Erasmus 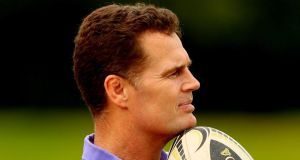 Munster director of rugby Rassie Erasmus: “The way we played on Friday won’t win us any championships or any cups.” Photograph: James Crombie/Inpho

Munster will be boosted by the return of Ireland’s CJ Stander for next weekend’s game with Cardiff in Cork, but Rassie Erasmus says his side have a lot of improving to do ahead of that tie.

Munster, who have now moved into their new training facility in UL, got their season off to a bright start with an impressive away win against Scarlets last weekend, but he feels his side were not tested to their limits in that ten-point win.

A stern defensive effort allowed the Munster attack to run in a couple of game-winning tries, but the loss of Simon Zebo early on is expected to stretch to their first home game of the season.

Zebo had a scan yesterday on the rib injury that Erasmus expects will ruled him out for the weekend, while Stephen Archer (neck), Kevin O’Byrne (elbow) and Peter O’Mahony (knee) are all set to miss out as well.

“Maybe it’s not too bad and it’s only muscle or something but I will be surprised if he (Zebo) is ready but we will know better tonight,” said Munster’s director of rugby.

“Sometimes a cartilage can feel like a broken rib and some guys have higher pain thresholds than others but he’s a pretty tough guy so hopefully it’s not a long, long term thing unless it cartilage or something like that.”

Erasmus said he was pleased to see a gradual improvement from his side’s pre-season games, but that he didn’t envisage them winning anything this year if they continued at their current standards.

“It was gutsy and determined and the guys were prepared to work at their game out there. Both tactically and technically there was so many things that were not spot on, there is so much to work on. That always helps not to get carried away,” he said.

“It’s a short turnaround and we have so much things to rectify, and I’m pretty sure we won’t rectify all of them before Friday and there will be some mistakes as well.

“As long as we go game by game and improve from experience of the previous weekend’s game, we’ll get better and better.

“I don’t think we were so much under the pump on Saturday, we weren’t tested that much. Certainly at times in the beginning we were tested and it will get much tougher in the season, but that’s one of the big things that Munster have done.

“The way we played on Friday won’t win us any championships or any cups. But that’s something to build on.”

As well as Stander’s return from the player welfare programme, there is a chance that Andrew Conway could also feature this weekend after he shook off a knock to play some part in an in-house game against the U-20s.

Munster’s defensive efforts received many plaudits after their win at Parc y Scarlets at the weekend – Tommy O’Donnell led the line and was a deserving man of the match – but Erasmus would prefer to see his side start brightly rather than defending their own line.

“The game against Worcester, we started and we had to defend for a minute or a minute and a half, which is good if you stick through it,” he said.

“But there is always opportunities in the first few minutes. You want to get off to a more solid start. If you don’t you defend like that, but then it has to be personal and you have to settled down. So that’s the pleasing side of things.

“I think tactically you don’t want every game going to that and having to weather that and then only get into the game. So yes, gutsy and personal, but tactically not the smartest way we played there.”