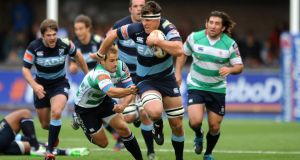 Robin Copeland: “I’m an Irishman and my dream is to pull the green shirt.”

Munster have confirmed the signing of Cardiff Blues number eight Robin Copeland next season with the 26-year-old from Wexford returning home in a bid to fulfil his Ireland ambitions.

Copeland will join the province in June following two impressive years in the Welsh capital since arriving from English Championship club Rotherham Titans.

Cardiff, who are losing lock Bradley Davies to Wwasps and are embroiled in an off-field dispute with the WRU which could affect the futures of Sam Warburton and Leigh Halfpenny, offered Copeland a new contract, and he would have qualified for Wales on residency grounds in time for the 2015 World Cup, but has opted to push for a place at Munster.

“We’ve seen Robin in action first hand and we’ve always been hugely impressed by his potential,” Munster coach Rob Penney said this morning. “From his experience in playing a number of positions he brings a great deal of versatility and we believe he will be a great addition to the squad. He will add value to a highly competitive area of our game.”

Copeland had previously made no secret of his ambition to move home, saying: “I’m an Irishman and my dream is to pull the green shirt on but if those opportunities aren’t there I still want to play at the best level and keep moving up the ladder. There are a lot of great players back in Ireland, Jamie Heaslip is there, Sean O’Brien is a good number 8, Peter O’Mahony at Munster - these are fantastic players who prove themselves week in week out.”