Marty Moore set to leave Leinster for English side Wasps

Prop set to sign a three-year contract, as opposed to the two-year deal Leinster have offered 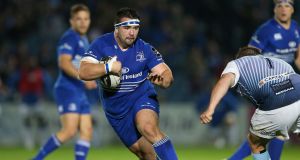 Marty Moore: is attracted by the prospect of being coached by Young, who won 51 caps for Wales and made three Test appearances for the Lions. Photograph: Inpho

The player drain from the Irish provinces is set to continue, with Marty Moore on the verge of leaving Leinster to join Wasps. The Irish Times has learned Moore’s impending move to the Coventry-based Premiership club at the end of the season is likely to be confirmed in the next couple of weeks. Ironically Leinster face Wasps in their final pool tie at the Ricoh Arena on Saturday week.

The 24-year-old Moore has agreed to join the upwardly mobile Wasps, who relocated to Coventry from London last season, where he will be coached by the former Welsh and Lions’ loosehead Dai Young.

Moore is attracted by the prospect of being coached by Young, who won 51 caps for Wales and made three Test appearances for the Lions, with whom he toured three times. Furthermore, after being head coach with the Cardiff Blues for eight years, Young has been at the helm at Wasps as their director of rugby since 2011.

It is also understood Wasps have offered Moore a three-year contract, as opposed to the two-year deal Leinster have offered him after the player has previously signed one-year contracts for each of the last two seasons. This will keep the prop at Wasps until the 2019 World Cup in January. Clearly though, Wasps are content to give Moore full release for the international windows.

Even so, it seems rather curious in addition to the two-year deal Tadhg Furlong has with Leinster, the province are understood to have agreed a one-year contract with the 36-year-old Mike Ross, who has previously been on international contracts with the IRFU.

In any event, they are set to lose Moore. As Ross has shown, moving to England need not necessarily be an impediment to an Irish career, as the Cork-reared one-time Munster prop spent three years at Harlequins from 2006 before relocating to Leinster in 2009.

The difference is Ross launched his professional career with Quins. Having made his debut on the North American tour of 2009, Ross did not make his first Six Nations start until 2011, and has now played 56 times for Ireland. He is in a race against time to be fit for the Six Nations opener against Wales due to a torn hamstring.

By contrast, Moore has already won 10 caps, all of them as replacements in Ireland’s last two title-winning Six Nations campaigns, during which he averaged over 20 minutes per game. He would have gone to the World Cup but for a broken metatarsal which eventually required surgery. Having played over 50 times for Leinster, and still to enter the prime of a prop’s career, following on from confirmation Ian Madigan is set to join Bordeaux/Begles, Moore’s departure to Wasps is another loss for Leinster.