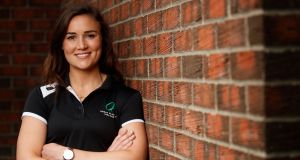 Louise Galvin’s rugby career is on hold at the moment as she works on the frontlines in ICU. Photo: James Crombie/Inpho

Louise Galvin commutes from her home in Lucan to Tullamore Hospital four times a week to work as a physiotherapist where her duties include assisting in the rehabilitation process of patients who have been in the Intensive Care Unit (ICU).

Ireland’s Health Service Executive (HSE) issued a clarion call to medical professionals at the start of the coronavirus pandemic and Galvin was happy to oblige, swapping her locum work at the Beacon Hospital in Sandyford for a place on the frontline.

When not in her PPE and scrubs, she reverts to an alter ego: Louise Galvin, Ireland Rugby Sevens international, diligently adhering to the specified fitness programme while aware that a return to the World Series currently seems a distant prospect.

The 33-year-old is grateful for an occasional training partner in her husband, the three-time All-Ireland winning Kerry footballer Donnchadh Walsh who is also a physiotherapist. He has retired from intercounty football but prior to the lockdown continued to play club football for Réalt na Mara, Cromane, a commitment that necessitates a five-hour round trip.

Galvin admitted that juggling work and training for the past five weeks has given her a new found respect for individual athletes that train in isolation all the time. “They have to motivate themselves. I come in from work wrecked and don’t feel like training but it’s good to have someone else there pushing you.” Big brother is watching too in the form of GPS units that record the training data.

Five weeks into her stint at Tullamore Hospital she deals with faces not figures, leaning heavily on her experience as a cardio-respiratory physiotherapist at University Hospital Limerick, a position she gave up to join the Ireland Sevens programme in May, 2015. Her previous work with cystic fibrosis patients underlines her huge value in overseeing patient recuperation.

“In IC (intensive care) you can get very used to patients being medicated and sedated but it is always important to ensure patient dignity whether they are fully lucid or not. People are often not in the ICU nearest them (in terms of where they live, sometimes transferred from other hospitals). They can be very much confused, they haven’t see their family and there you are trying to tell them you have missed the last 40 days of life; all they can see is your eyes.

“A lot of them would have had a tracheostomy so they can’t really speak. They have to mouth the words and you have to be patient. They have very little autonomy. It’s not uncommon for them to have almost a post-traumatic stress disorder.

“It’s a nightmare waking up and being told you don’t have the use of your limbs fully yet, you can’t speak, you can’t eat or drink either and you are in this crazy world. You probably think the world has been taken over by aliens,” a reference to the first visual stimulus a patient sees.

Galvin said: “When you see them start on the ventilator you know they have a long and hard battle ahead of them, (potentially) the toughest they’ll ever face. On the other hand, when they emerge on the other side it serves as a great boost (for everyone).

“Once they start to wean them off their ventilator, my job is then to get their arms and legs moving. It’s amazing how much muscle can waste in that time. They are so de-conditioned. To get them to be able to sit upright on the side of the bed would feel the equivalent of running a marathon. It takes a huge physical and psychological toll.

“When they eventually return to the wards they are being feted as heroes having survived Covid-19 but they are still so far off their baseline. People are telling them they are the lucky ones but they don’t feel that way at the time; they feel like crap.

“They can’t walk five metres, they are still in hospital and they haven’t seen their family in two months so it is having those things at the back of your mind in understanding that anyone could be having a bad day: let them know that they are doing well but let them give out. It’s moving towards a rehab ICU at this stage.

“It’s been eye-opening and enlightening. You’re still chatting about when the rugby might start again but the perspective I have been given since I started to work during the pandemic puts things in context. These are real life problems for real people. They are incredible people and it is so rewarding to be part of their story and be able to help out.”

Galvin’s dynamism and work ethic – she completed a Masters last year – was cultivated from a young age. Growing up in a farm in north Kerry, she played Gaelic football and basketball initially. She could no longer play with the boys at under-14 level and had to wait until she was 21 before the local Finuge GAA club started a women’s team.

She had played with the Kerry senior footballers within a year and with whom she reached an All-Ireland final in 2012, only to lose to that outstanding Cork squad that won 10 titles in 11 years. “Reaching the final was the best day and the worst day in a Kerry jersey. It was unbelievable to be walking around Croke Park on an All-Ireland final day but we didn’t play well and were well beaten in the end.

“We did beat them in a Munster final a few times. They didn’t take their eye off the ball but what would generally happen was we’d work hard all year, catch them in Munster and they just had that championship pedigree and when it came to an All Ireland semi-final of final in that case they’d catch us.”

She represented Ireland in basketball having started playing in primary school and then at Presentation Listowel, winning national leagues and cups. At one point Galvin played basketball (UL Huskies), football and rugby (UL Bohemian), simultaneously before in 2015 she faced a choice. “I went on a (national rugby) training camp (as part of the IRFU’s Talent ID programme) and loved it.

“I got a career break from my job in the hospital in Limerick and moved to Dublin in May 2015. I thought I was a bit mad leaving my permanent, pensionable job in Limerick to move to Dublin and play a sport I didn’t really know. I didn’t know anyone on the team either but I have absolutely no regrets now.”

She’s been a mainstay in the Ireland Sevens team – she made her 15s debut in the 2017 Rugby World Cup against Japan in UCD – embracing a sport that she argues is “definitely the hardest I have ever played. There is no rest period. You could be the fastest player on the pitch or the most skilful but unless you have a work-rate to match that it’s irrelevant. It is such a team sport, you are so reliant on the person inside and outside you.”

Amongst her favourite memories to date, are beating England at the Sevens World Cup in San Francisco (2018) and also making a first ever World Series semi-final in Sydney (2019) while she singles out Cape Town, Sydney and Dubai, where she got engaged following the tournament in 2018, as standout venues for different reasons.

When rugby resumes, the Sevens World Series because it generally requires long haul international travel, will be even further behind in terms of a timeline. Galvin accepts that the IRFU’s financial issues may have a knock-on effect for the programme even though the contracts are miniscule in comparison to the top earners in the men’s 15-a-side game.

A member of the Rugby Player’s Ireland Executive, she champions the value of being qualified for life after the sport. Galvin still has much she wants to accomplish in rugby but her immediate value to her current team is in wearing scrubs and not a jersey.