Lions staying on their feet in the PR game 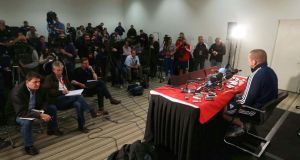 Graham Rowntree faces the media in Melbourne. The Lions’ forwards coach was was at pains to move on from James Horwill being cleared of stamping. Photograph: Billy Stickland/Inpho

A Lions tour seems to scarcely go by without some controversy regarding disciplinary issues. Akin to previous odysseys to the Southern Hemisphere, as a result of James Horwill being cleared of reckless play for his third-minute stamp on Alun-Wyn Jones late on Sunday night in Brisbane, the tourists moved on to Melbourne and began showing the first signs of an us-against- the-country mentality.

The third-minute incident involving Australia’s captain wasn’t on the scale of Duncan McRae’s assault on Ronan O’Gara in the Waratahs-Lions game 12 years ago. Nor was it remotely comparable to the double-spearing of Brian O’Driscoll in the first minute of the first Test by Tana Umaga and Keven Mealamu, when Umagawas cleared of foul play in 2005.

Nor was it nearly as nasty as Schalk Burger’s hands coming into contact with the eye area of Luke Fitzgerald, as the saying goes, in the first minute of the Springboks’ second Test win in 2009.

Burger was merely yellow- carded, though subsequently banned for eight weeks, though afterwards, a la the Speargate fall-out, neither he nor Pieter de Villiers apologised. Note the early timing of the last three incidents.

Nevertheless, there was even a feeling among the Australian media the Wallabies’ captain was in big trouble in advance of his hearing, which ultimately took four hours and so missed the deadlines for yesterday’s Australian papers.

As the former Munster forwards coach Laurie Fisher, now with the Brumbies, tweeted on Sunday: “Doesn’t look good for James Horwill but he has got away with it before. Judicial decision will have massive implications.”

By the time Horwill was cleared, the rumours of O’Connell having fractured his arm were circling on Twitter, and Fisher summed up the general feeling when tweeting: “Paulie out Horwill in, double whammy. Advantage Wallabies.”

Double whammy
The Lions’ forwards coach Graham Rowntree was the first member of the tourists’ coaching staff to speak on their behalf in the fallout of this double whammy which tilted the balance toward the Wallabies, and clearly as part of an agreed policy, played the deadest of straight bats to all questions on the matter.

Asked was he deliberately trying not to antagonise the Aussies, he smiled: “I’m not one for antagonising people. No, I’ve got enough to worry about. What can you say? You can’t change anything. We just have to get on with it.”

Like a dog with a bone, the English writers keep probing as best they could. Given players had been repeatedly told not to overstep the mark, did the judicial ruling not make it difficult to reinforce that point?

He was asked if the thought the IRB might review the ruling.

“Ask me another question. I’ve got nothing else to say on that. It’s not a talking point within the group any more. We’re looking forward.”

But the Lions had referred the incident for citing.

Then it was put to him did he not just think that the decision was rubbish. Rowntree smiled. Everyone laughed. But there really was no point in making an issue out of it. Better to grin and bear it.

No doubt the Lions have learned the lessons of 2005, when the Alastair Campbell-choreographed Lions’ PR machine went into overdrive in the fallout from Speargate in a manner that was the polar opposite of their response yesterday.

The current management and PR department were assuredly mindful of what that achieved. The All Blacks developed a siege mentality and were, despite comfortably winning the first Test 21-3 in Christchurch, the ones in a vengeful mood when putting the Lions to the sword in Wellington a week later by 48-18.

Wounded foes
There’s nothing to achieve by riling the Wallabies or the Australian media, not least as it’s the Lions who are one-up and the Wallabies are wounded enough. And aside from the anticipated reaction from wounded foes fighting for their lives, Warren Gatland has already voiced the Lions’ concerns about Chris Pollock’s refereeing last Saturday, and specifically at the breakdown where they were penalised seven times in a 12-7 penalty count against them.

With another Southern Hemisphere referee this weekend, Gatland threw garlands towards Craig Joubert, but there is deep disquiet within Lions ranks over Pollock’s performance.

In the Australian media, there’s been relatively little criticism of Robbie Deans and his selections or tactics, although one senses the choice of James O’Connor as outhalf is being kept on the back burner, as might Gatland’s decision to change his props in the 52nd minute.

The response to and coverage of the Wallabies’ defeat has largely centred around the dramatic endgame, when favoured son Kurtley Beale slipped when missing the second of two late penalties with the last kick.

As with the Australian media and public, the Wallabies will rally around Beale, whom Deans had sensitively tried to reintroduce quietly to the game off the bench in the first Test only for him to be plunged into centre stage.

It was his first game back since an abortive comeback had been interrupted by a self-imposed retreat from the game and visit to a clinic for drink-related issues, which in turn prompted Australian chief executive Bill Pulver to describe Beale as a “national treasure”.

Sport’s ability to take licence with such words was questioned by The Australian’s rugby correspondent Wayne Smith, who brilliantly recounted an afternoon he spent interviewing war veterans to determine that perhaps they were more worthy of the description, while still retaining the evident affection all feel for Beale.

In such a sports mad country, the Test series was struggling yesterday amid the brouhaha arising from the sacking of Micky Arthur as Australia’s cricket coach on the eve of the Ashes. And as for tomorrow, forget it. It’s game two in the State of Origin. But as Saturday’s pivotal second Test looms, Beale will perhaps now become a rallying point.