Joe Schmidt will need to address counter-attack policy, offloads and the ability to come from behind 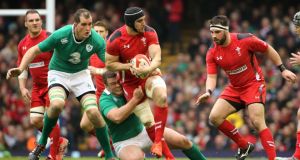 Wales’ Sam Warburton is tackled by Ireland’s Jack McGrath at the Millennium Stadium. Warburton was simply immense in both defence and at the breakdown. Photograph: Crispin Rodbwell/Inpho

According to Winston Churchill to improve is to change but to be perfect is to change often. With six and a half minutes left Ireland were four points down. For a team that has won 10 in a row, high on confidence, four points in this time seems very achievable. Get good possession, then field position get any score and if necessary regain the Welsh kick-off and go again for the Irish speciality; drop goal.

Crucially at this point Ireland had possession but poor field position. The tactical change came, the bench flooded in but Ireland chose to carry from deep in an effort to score, conceded the inevitable Wayne Barnes “interpreted” breakdown penalty on 73:38 and Leigh Halfpenny pushed the scores to seven points (23-16).

Now Ireland required more than a converted try to stay on track for the Grand Slam. Were Ireland disjointed? Low on confidence? Or simply in a place they hadn’t been for a long time?

The truth to these questions lay in the previous 73 minutes; Ireland’s tactics and Wales bullying of them. On 53:30 minutes Ireland went down the line from a Liam Williams penalty on Simon Zebo. Their creaking lineout secured this time and Ireland sensed a precious opportunity deep in Welsh territory. When Wales slowed and eventually stopped the Irish maul, Conor Murray spread the ball with Tommy Bowe nearly getting over.

Then the remainder of these three minutes tells Ireland’s tale for they went over and back and over and back, taking the ball from standing starts and simply unable to penetrate the violent Welsh defence until the inevitable turnover occurred when Johnny Sexton flopped over Jared Payne in an effort to secure the ball; penalty Wales at56:16.

Then later on 58:30 Ireland turn over on the halfway line with Wales getting their three minutes. They immediately injected huge pace, power and depth carrying in both hands to tear Ireland’s defence apart in breaking from their own half all the way to Ireland’s five metre line. That turnover was huge; Healy carried, Dan Lydiate chopped while Sam Warburton attacked Healy’s chest and the ball.

Ireland focused on Warburton but it was the immense Alun Wyn Jones who piled through on Paul O’Connell to get the turnover. Turnover ball is never easy to defend but Wales did brilliantly until their outhalf Dan Biggar chose to skip players in firing a right hander way out to his fullback Leigh Halfpenny and into touch saving Ireland momentarily.

Ireland did try to negotiate the Welsh defence such as Johnny Sexton’s little chip kick on 26 minutes over the Welsh midfield wondering would Rhys Webb cover as scrumhalves should; he did!

The crossfield chip was also employed but Wales were very comfortable in their aerial responsibilities. Ireland’s first scrum of the second half on 43 minutes was solid and they played right with a deft midfield switch to Robbie Henshaw followed by another out-and-in play to a blind runner before Sexton chipped to the left wing hitting touch on the full.

Ireland then brought a new ploy engaging the blindside winger or fullback off the first receiver where several times a back popped up from behind the breakdown to take an inside line and ball to good effect. Our outrageous return on these plays previously all dried up on Saturday compounded by errors.

Ireland’s loosehead prop Jack McGrath got scant reward for dominating two Welsh tighthead props Samson Lee and Aaron Jarvis. McGrath was the dominant force. The first scrum was a Welsh put in but Lee couldn’t take the heat from McGrath and went off as a result; Jarvis fared no better.

But then McGrath was penalised on 31:20 from a Welsh scrum. Once again he dominated Jarvis but Barnes was not happy with direction. Come on; is it McGrath’s role to cater for Jarvis? The penalty led to multiple Welsh phases and a drop goal; 15-6.

I counted five consecutive Irish carries from 9:10min where Ireland were hit well behind the gainline with Ireland persisting in attacking around first out and were hammered backwards till the penalty arrived; 9-0. To that add the Irish errors.

As predicted on Friday the Welsh breakdown is at a level Ireland hadn’t experienced thus far and it showed. They continually sucked in multiple Irish players creating numerical mismatches in Wales’ favour out wide.

Did Ireland fully understand Warburton’s yellow card absence to the breakdown and how they could adjust their ambition with his threat absent for 10 minutes? Similarly did they understand Jonathan Davies absence when going down the line off a penalty when a scrum may expose their numbers easier? Wales played a powerfully simple game, smothered Ireland and deserved their win.

Back to Churchill. Ireland will learn from many aspects but most importantly how to manage the clock from behind and what to do when what worked thus far doesn’t; aerial kicks, etc.

1 Wales cry foul over Furlong’s scrum technique
2 Ireland to stick with winning formula against England
3 Gerry Thornley: England primed to show their best against Ireland
4 Mourinho expects Son to miss rest of the season
5 Man City’s Abu Dhabi owners not the sort to back down over ban
Real news has value SUBSCRIBE