Liam Toland: How to cheat the breakdown laws 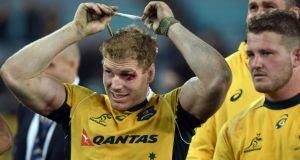 Australia’s David Pocock is one of the best operators at the breakdown in world rugby. Saeed Khan/AFP/Getty Images

With a slight lull in play this weekend I decided to consult the rule book or should I say ‘World Rugby laws of the game’. With 48 World Cup matches awaiting I wondered aloud in Lansdowne FC after the Ireland v Scotland game about how the referees interpreted the rules at the weekend.

The breakdown as always makes for compelling watching, especially the interpretations and tactics of the southern hemisphere. Rugby’s most capped player of all time, Richie McCaw, has long been a leader but Australians David Pocock and Michael Hooper, when on the field simultaneously, are at a new level.

Of course, my understanding of the laws is one thing but what of the coaches, players and, most importantly, the referees.

For instance, in February 2015 Joël Jutge, World Rugby’s high performance referee manager made a request for clarification of Law 5 in relation to the Scotland v Wales Six Nations match at Murrayfield. Jutge wanted protocol clarification in relation to taking a restart when time has elapsed at the end of a match. This clarification is part of a new, more agile law interpretation process.

As the World Cup unfolds, the audience can no longer pull out the laws of the game to satisfy their curiosity around such key aspects of the games as the breakdown as these ‘guidelines’ are all open to interpretation. I wonder about the early penalty French referee Pascal Gaüzère gave against Scotland’s giant Jim Hamilton in rucking Gordon D’Arcy. Was an interpretation of the laws opposed to a specific law Hamilton had broken? Sitting in Lansdowne FC a mate checked the laws as written down and found ‘guidelines’; back to interpretation!

The members of the law interpretation group assigned to provide clarity for Jutge are a quality bunch of rugby men in chairman John Jeffrey, Agustín Pichot, Nick Mallett, Harry Schuster (World Rugby Council), Chris Le Fevre (World Rugby Council). They ruled that World Rugby backs the decision made at the end of the Scotland v Wales match. Put simply a team having scored can elect to convert the try or chose to move on to the kick-off. This becomes relevant should the scoring team need more than two points. A restart will occur and the match will end at the next stoppage.

Similarly, queries exist around resetting scrums at the death or going for touch off a lineout penalty. This clarification is a new interpretation that will provide certainty for any future issues of this nature.

So to the breakdown. What in fact did Hamilton enter as he attempted to clear out D’Arcy? That is, was it a tackle or a ruck? This is of crucial importance because what may appear to be a ruck may not yet be and there are two outcomes. Firstly, the offside laws concerning a tackle area (non-ruck) have a monumental impact on subsequent actions at that location, but infinitely more important are the actions that occur wider out.

No offside line; think for a moment what that means in real terms and ask how often you’ve shouted at the TV ‘offside’ when in fact there is no offside line to begin with. This is a little like understanding when the lineout is over. Outhalf David Humphries made a brilliant habit of flying up from his defensive position as the opposition lineout pod crossed the 15m to meet the thrown ball; it appeared he was offside but he understood the laws and was not.

Sticking with the tackle or non-ruck. What appears from the stands to be a ruck may in fact still be a tackle area, which means that with no offside, any player at least a metre from the tackle area can stand wherever they wish; out in the opposition’s backline for instance! Clearly the transition from tackle to ruck at international level is a speedy process which often tricks the viewers into assuming the transition has occurred. Equally, too, the referee can be tricked.

But teams are waking up to this tactical option. To understand this powerful option, one must understand when a ruck is formed. Typically it forms when a player from each team engage over the tackled ball. Once this occurs, the laws as understood apply. That is, all players must stand behind the rear part of their team-mate engaged in the ruck; an immediate offside line evolves.

With the upcoming World Cup in mind, we must try to fully understand the potential of the ruck-versus-the-tackle area. It is our natural instinct to make the tackle and the completion of the tackle typically has the ball-carrier and tackler on the deck, with players from both sides immediately engaging over the ball in an effort to secure possession.

Shouting at the TV

As for the second outcome from above regarding Hamilton and D’Arcy, more next week.